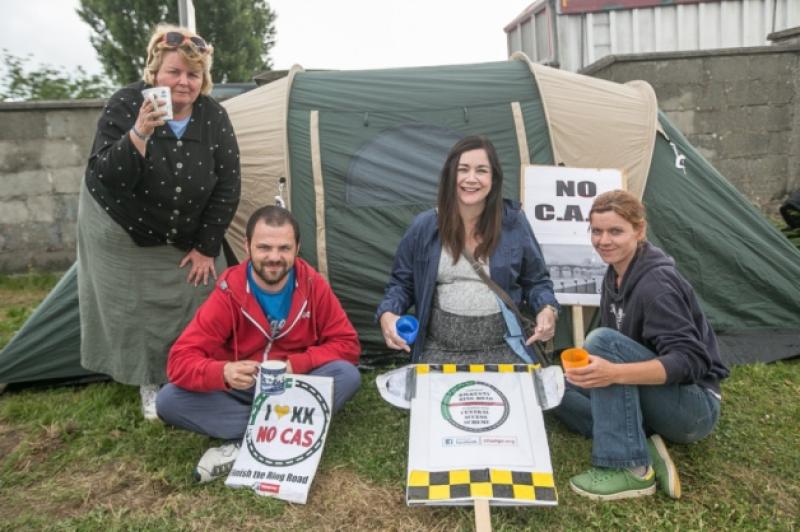 The rain came and the night came, but still they stayed.

The rain came and the night came, but still they stayed.

The anti-CAS protesters bedded-in at their demonstration site on Greensbridge last night. They have a tent, and they say they are in for the long haul.

People have been coming and going, showing their support or just dropping off supplies. Some local businesses have also offered the use of their facilities to the demonstrators.

Just after 4pm yesterday, a large HGV, which was transporting pile-driving equipment, was prevented from accessing the site by a group of about 20 demonstrators. It left at around 5.30pm, but the protesters feared it would come back during the night.

A small group of them stayed on, with others coming and going at intervals. At about 4am, Gardai arrived and took the names of four of the protesters.

The protesters say they are there individually, and not under the auspices of the CKRR group, which was previously the main opposition group to the CAS. They are of all ages and different backgrounds, united in one purpose – to halt the construction of the new city bridge.

One man, Stephen Mullally, had been on the site for a number of hours when I spoke to him.

“I live locally and I don’t want to see a monster of a bridge over the river, splitting the city.”

This morning, another protester, Paddy Kelly, had been on the scene for more than six hours when I spoke by 9.30am.

“I have some time off today, so I decided to come down,” he said

“The guards arrived earlier and took names. They were very polite.”

The protesters intend to continue their picket throughout the day and into the night again. At lunchtime today, they were around 30 in number.