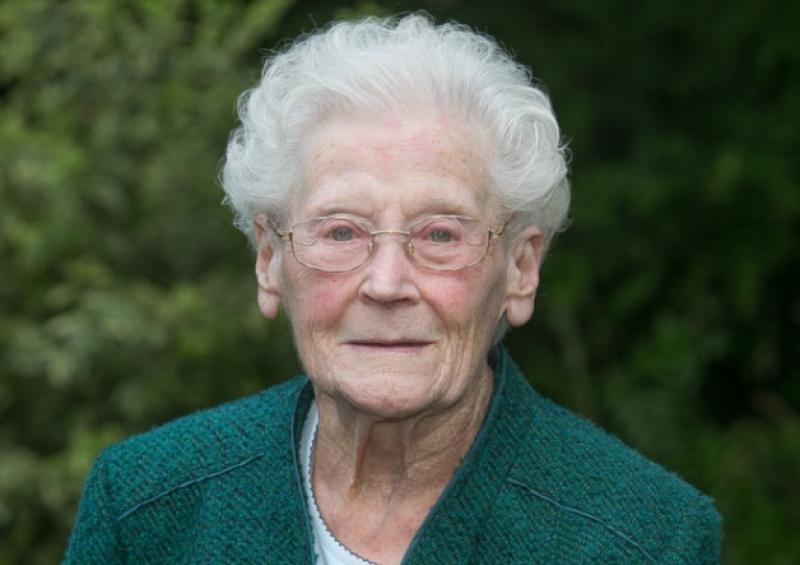 Maureen Hegarty celebrated her 93rd birthday on September 1, watched the All Ireland hurling final on television on Sunday and remains an independent spirit who spent a lifetime teaching in Kilkenny city where her students said, according to herself, she was a”Devil” over English grammar but was always fair.

Maureen Hegarty celebrated her 93rd birthday on September 1, watched the All Ireland hurling final on television on Sunday and remains an independent spirit who spent a lifetime teaching in Kilkenny city where her students said, according to herself, she was a”Devil” over English grammar but was always fair.

Secretary of the Kilkenny Archaeological Society (KAS) for almost 20 years, she was one of those who saved the historic building on Parliament Street from being knocked to the ground in the 1960s.

She is still feisty and as sharp mentally as she was a quarter of a century ago and revealed that she turned down three proposals of marriage.

She doesn’t agree with the new plans for Rothe House run by the KAS or with the amount of money it will require. With some pain, she disclosed that she is at odds with those now in charge but would like to make her peace with them before she moves on.

Neither does she think the new bridge over the River Nore as a part of the Central Access Scheme (CAS) is a good idea.

Asked what subjects she taught in the Presentation and Loreto secondary schools, where she had a combined service record of 36 years, she replied firmly: “Manners”.

With a glint in her eyes, she explained that she could have taken out a British passport as she was born before the War of independence.

Her parents, Denis P and Mary Hegarty were school teachers in Johnswell village where she was born and for where she still has a great affection. From there she went to the Loreto convent in the city as a boarder, then UCD and worked as a teacher in a Catholic convent secondary school in Wales for six before returning home.

When she returned after the war, she secured a teaching post in Presentation Secondary School and after 18 years there moved to Loreto where she ended up as vice-principal.

Her main subject was English and remembers a former student saying to her recently: “God you murdered me for the possessive case.”

“I was always very critical of bad grammar. I loved the language and I wanted it to be done well,” she added.

Her little dog called “Pip”, is on her lap and she confirms that he is called after the character from Charles Dickens’ Great Expectations,

During her adult life, she involved herself completely in the KAS, and was secretary for over 18 years and she loved every minute of it. She had a great relationship with the late chairperson, Mrs Daisy Phelan and remembers great trips abroad including one to Paris where a number of the touring party couldn’t keep up and got lost.

She is far from diplomatic on the new New bridge. “I picketed the new bridge. I think its dreadful. First of all the people weren’t asked what they wanted. Secondly they didn’t want it down there; thirdly it’s an eye sore and fourthly they haven’t said what roads will feed it. The plans just are not complete,” she said in her authoritative manner

My mother was from the top of John Street, Mary Gleeson where Egan’s public is now. “Mother was born there, her father died young and her aunt, her mother’s sister got the place, so Mam and the family moved down John Street. Our most distinguished claim to fame is that my grandfather came in from Mullinahone, married Ann O’Toole and he was a criminal. He was a Fenian and involved in the Rising. He became a rigid Victorian, Irish Catholic. It couldn’t be worse,” she joked.

When asked, she said Rothe house is the most important building in Kilkenny. “When we opened in 1966 it was jubilation that this wonderful Tudor building was saved from the bulldozer. The opening was one of the best days ever.”

“I do regret not being in good odour with the KAS, because I do not agree with what they are doing, developing the house as part of the Medieval Mile. I have made myself very unpopular with my refusal to accept what they are doing because I think the house should be kept as it is and they are looking for an enormous amount of money now to change it and I don’t like the change,” she said with a hint of sadness in her voice

“I love Rothe House and the society was my life, it was the best fun I ever had, we went on many foreign holidays and it was hilarious,” she said. An unrepentant Fine Gael supporter, she points to the wall where a photo of her with the late Dr Garret Fitzgerald is mounted showing the two seated together after she received her honorary doctorate at the NUI campus in St Kieran’s College.

She met the late Charlie Haughey at the re-opening of Duiske Abbey and invited him to view Rothe House after pointing out to him that he had his facts wrong on something he said during the Graignamanagh event. “A month later got a phone call on a Sunday evening that Mr Haughey was visiting. He came with a large retinue and gave us £20 that was the enormous amount we received, we were expecting at least £1.000,” she said.

She has had a life-long love affair with hurling and attended her first All Ireland final in 1939 and went to the Clarence Hotel afterwards with her Kerry born father (Denis Hegarty from Kilgarvan, Co Kerry) and her Kilkenny city born mother. “Kilkenny beat Cork, 2-7 to 3-3 and the rain was as bad as it was during the recent All Ireland semi-final this year against Limerick,” she said.

“The 1947 All Ireland caused as much excitement as the one we are preparing for in 2014. It was our first at the end of World War II and everything on wheels went to Dublin, including a few hearses.

“There were only three Hogan Stand tickets for our family of five. Mother was banned on the grounds that she got too excited and my sister, who lived in Dublin, took charge of her and thought that the safest place, that is, the least public place was a cinema. So she took her to the Savoy.

“Mother was born in the ‘Continent’ and was not an aficionado of the big screen but she sat down quietly until a notice was flashed on the screen that the match had started. She stood up and ordered everyone to shout for Kilkenny and reprimanded them for their silence.

“A film audience in Dublin on a Sunday afternoon had no interest at all in the caman and the sliotar. Every time there was a score it was flashed on the screen and each time she got up and went further afield along the aisles remonstrating with the audience over their lack of interest in the match – Kilkenny and Cork.

“This 1947 match was of vital importance because we had won the ‘thunder and lightening’ All Ireland fought on 3 September 1939; the day Neville Chamberlain, the British Prime Minister, had declared war on Germany.

“Being a good Kerryman he dodged all the Gardai and he managed to park almost at the gates and I being the younger of the ‘two children’ was lifted over the turnstiles.

“In 1939 the game and the storm started together. Recently we saw our boys contend with God’s most deadly weapons thunder and lightening against Limerick. Then we saw what can never be seen on television: the water cascading from the sliotar every time the hurley made contact. In the end ‘we won. In 1949, Mother did not enjoy her visit to the Savoy Cinema in O’Connell Street but that did not stop her remonstrating with the audience.”

“My Sister never saw the end of the film because she decided to get Mother out of the cinema before she was thrown out. As they emerged from the dark and silence of the cinema Mother heard that Kilkenny had won so she told the pedestrians in O’Connell Street.

“She was easily identified by the colours that streamed from her person. With super human effort my sister got her to the hotel in Parnell Square, where she occupied the doorway and continued to celebrate and remonstrate.

“When Father saw her, he said; ‘thank God you weren’t there because he bore all the signs of the first battle of World War II, and so did I. We ran on to the pitch and showed all the traces of jubilation and victory. Mother came from the film also gave evidence of the battle against the Sunday going supporters of the big screen who cared not a fig that Black and Amber versus Red and White launched the first shots of World War II.”

“Next evening the Corporation of Kilkenny blacked out the city in danger of a visit from the Luftwaffe and we welcomed the team home in darkness,” she said.

And some advice: “You should try to be friendly and you should try to help people and if you have a row that should be the end of it. The kids in school said I was a devil but they liked me it’s proudest claim that I was fair,” she ended.