Kickboxer loses 12 stone, gets back in the ring and fights for Ireland 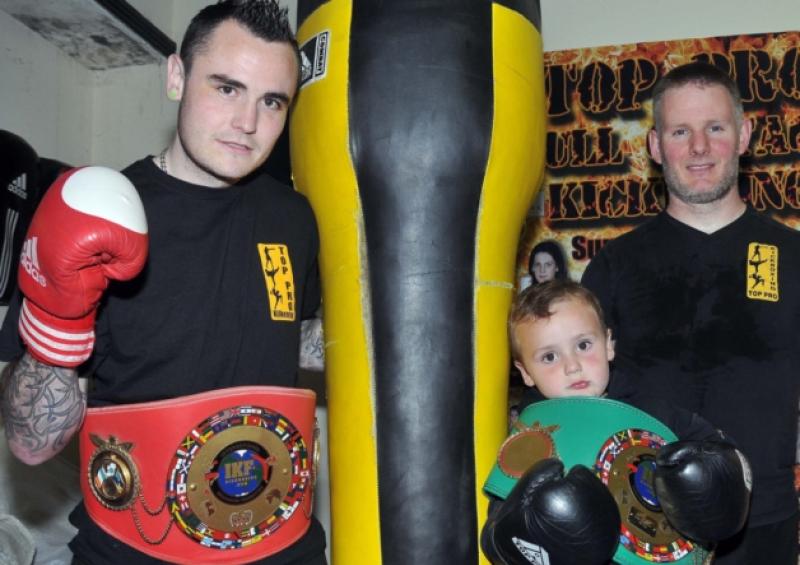 Showing incredible determination to succeed, a 24 year old Kilkenny city man lost over 12 stone in 18 months, got back competing in his favourite sport - kickboxing - and recently fought for his country in a Five Nations Title fight  in Kent.

Showing incredible determination to succeed, a 24 year old Kilkenny city man lost over 12 stone in 18 months, got back competing in his favourite sport - kickboxing - and recently fought for his country in a Five Nations Title fight  in Kent.

James Dunphy, from the Circular Road, spent his entire teens in the ring, both boxing and kick boxing - battling with weight issues and overcoming the taunts of bully..

It truly is an inspiring personal journey. James ‘light bulb’ moment came with real concern for his personal health, and the hope to spend some quality time with his now three year old son Josh. At 20 years of age, standing 5’9” James was over 22 stone. He’s not really sure what weight he peaked at, because he simply wasn’t keeping an eye on it.

Last week, James travelled to Kent to compete in the Five nations 65kg event. He was up against Liam Wells, a World Champion in the weight. He returned home with a bruised jaw, but with an army of admirers. Up to the time of Dunphy’s declaration, Liam Wells was waiting on an opponent when James picked up that particular gauntlet.

He fought to the end, when Wells was declared the winner. With a wry sense of humour, knowing he was beaten, James put his two hand sup in the air declaring his ‘victory.’ And although the count went against him it was a personal triumph. The ring announcer paid tribute to James courage, describing his display as one with “incredible heart” never before witnessed in the ring.

It may be the end of two years of training for James, but now he is certainly up and running. But the morning that he decided it had to stop, that was his starting weight - 22 stone or almost 140 kilos.

“I always had a weight problem, I suppose I was bullied a bit about the weight too. I enjoyed playing football but the weight never really shifted so when I was fourteen I joined Callan boxing club, and the weight just came off. I loved boxing and kick boxing, competing in the ring, just  loved it.”

He qualified as a fitness instructor at 19 but an eye socket injury from kick boxing really set his training back. It was six months of inactivity, no competing, and the weight just piled on.

He doesn’t see the weight loss as an incredible achievement - “It wasn’t incredible putting it on, so I don’t see it as incredible getting it off.”

Two years ago, James made a life changing decision. “The first three stone took months, and that was the hardest. Watching the wight come off so slowly”, he said - as he cut back with no slimming aids or any dietary supplements or programme“If there was anything it would have been alcohol and fizzy drinks out, and a big intake of protein - lots of chicken and fish,” he added.

When he hit 19 stone the real weight loss programme kicked in. And he is forever grateful to Top Pro boxing club in Kilkenny. Proprietor and trainer Paul Cummins literally took him under his wing

James had always fought, and was a national boxing champion. Around 2007 and 2008, in his late teens, he won Leinster and All-Ireland titles with Callan boxing club, and fought for Ireland in the 76 kilo European championships. At the time, the former CBS secondary school student took on kick boxing, and he preferred the all-action element of  that sport.

So at 19 stone, James was back in the ring, sparring and training with Paul, in their own time and space and working on getting him back to shape.

“The programme was tailor-made for me, my training was mainly one-to-one. Paul really went out of his way to do his best for me.

“By the time I got down to 16 stone, I was back competing and that was exciting,a great buzz from being back and competing against other guys. It just drove me on  from there.”

James went right down through the kilos, boxing at every level from 90 kilos down to his recent weight of 65 kilos. After recuperation from that event, he hopes to settle at the 62 kilo weight category.

His contest with Liam wells is now the stuff of legend, with Irish coach Paul Murphy in his corner, James went to Kent alone. He believed he would beat his opponent, and retains an incredible will to succeed.

And the support structure he has - from his parents Martina and Jim Dunphy, his son Josh,trainer Paul Cummins and his employer Elvery’s Sports on High Street, have all helped James to succeed.

“I do take some little breaks, you do need a social life but I really do keep an eye on things now. I will fall back to three times training a week, but when its picked up for competition its six times a week, twice a day and that’s the training I really enjoy.” James competed in the Five Nations title fight on September 7. He left the ring with a suspected broken jaw, but that’s all cleared up now and he is about to embark on his next stage of training, and competing at 62 kilos. That’s just over 9 stone. In 18 months he has lost more than half his body weight, become a National champion and represented his country in the ring. For James Dunphy his incredible journey is  just beginning.