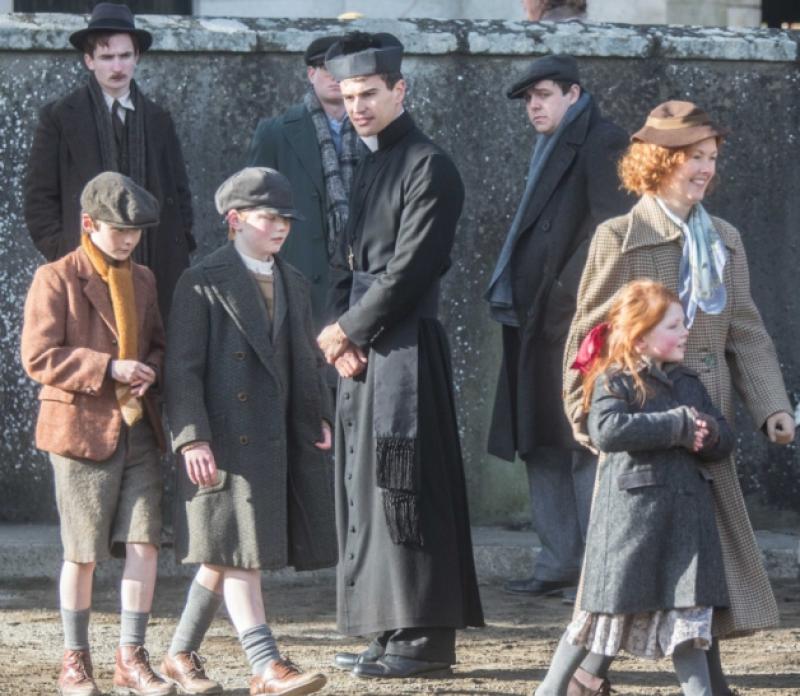 Crowds flocked to Inistioge this week hoping to catch a glimpse of glamorous Rooney Mara, ‘Nidge’ (Tom Vaughan-Lawlor) and even Vanessa Redgrave, as filming took place for The Secret Scripture.

Crowds flocked to Inistioge this week hoping to catch a glimpse of glamorous Rooney Mara, ‘Nidge’ (Tom Vaughan-Lawlor) and even Vanessa Redgrave, as filming took place for The Secret Scripture.

On a fine, crisp Monday morning, Tinsel Town arrived in the picturesque south Kilkenny village, with all the trimmings of a Hollywood production. There is huge interest in the production, both locally and from further afield.

ESB poles were taken down, new street lighting put up, and entire shopfronts remodelled as the little village was transformed into a snapshot of the 1940s. For example, the ever-popular Woodstock Arms – owned by the O’ Keefe family for generations – was transformed into ‘Hegarty’s Wine and Spirits’ for the occasion.

There was no need for facelifts, however, for the two churches which stand side by side but have remained largely untouched over the years. They are a focal point for the filming, with the current scenes featuring a distinctly religious bent.

The film, directed by Jim Sheridan, is based on the 2008 novel by Sebastian Barry. It recounts the tale of an elderly Irish woman recalling her difficult life, spent in mental institutions.

Along with the aforementioned, it features an all-star cast including Jack Reynor, Jeremy Irons, Erica Bana and British actor Theo James. On Monday, there was no sign of Ms Redgrave, to the disappointment of those who had come hoping to take a selfie with the Oscar-winning actress.

A slew of locals have been cast as extras in the film, and so their morning involved an early start to get decked out in period costume and act accordingly. Some of the talent clearly found things a bit chilly at times, with hot water bottles at the ready during breaks in production.

A crowd of about 60 or so onlookers gathered in close proximity, watching all activity on the open set.

Elaine Bradshaw, who heard of the filming on the radio, travelled down from the city for the morning to have a look at proceedings. Angela Bookle, from Brownsbarn just out the road, said the beehive of activity was fantastic for the village.

At lunchtime, a break was called allowing the stars, extras and curious film buffs to mingle a little. The actors had their food on a purpose-fitted double-decker bus which accompanies the production. Of course, this is by no means Inistioge’s first brush with stardom. In years gone by, it has been used as a location for the filming of both Widows’ Peak and Circle of Friends.