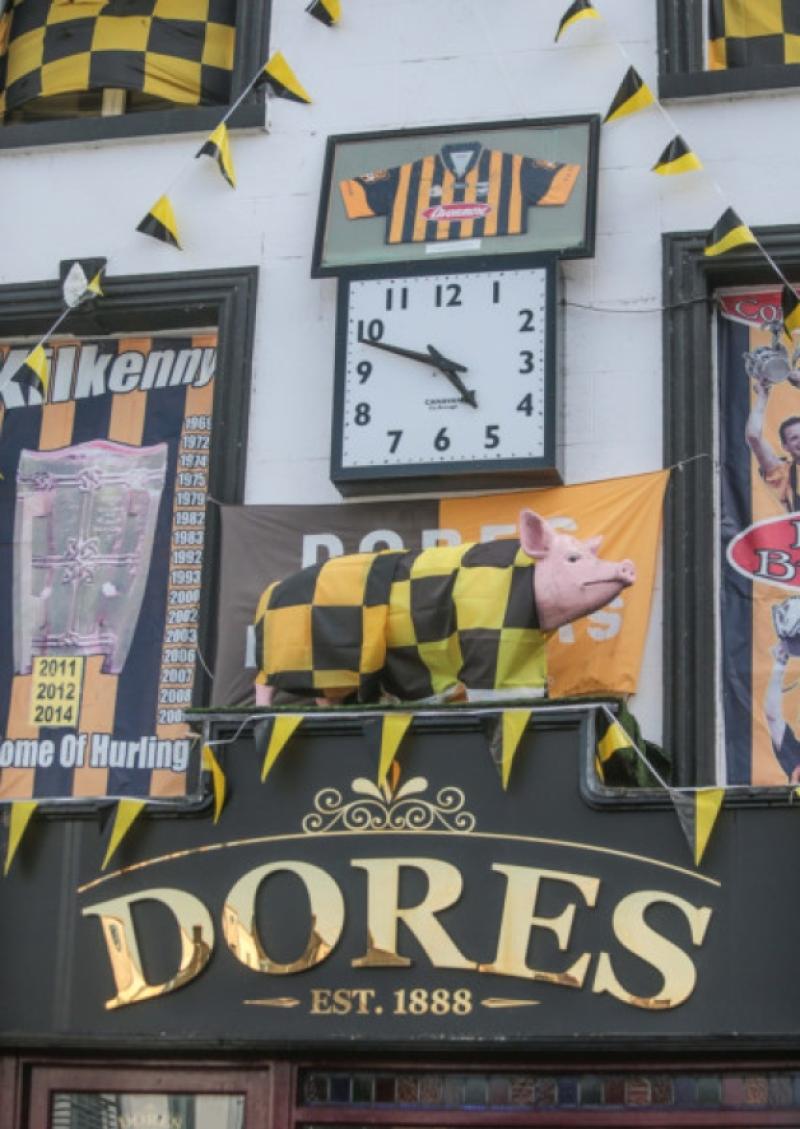 Just after 6pm this evening (Saturday) Peter Dore, with a tear in his eye, closed the front door of Dore’s Butcher Shop in the centre of Kilkenny city for the very last time. And with its disappearance, High Street has lost its last butcher shop

Just after 6pm this evening (Saturday) Peter Dore, with a tear in his eye, closed the front door of Dore’s Butcher Shop in the centre of Kilkenny city for the very last time. And with its disappearance, High Street has lost its last butcher shop

It wasn’t something that Peter Dore didn’t do lightly and the day was spent hugging and thanking customers who have been with the family and the shop for generations.

The iconic building at the very bottom of High Street and facing on to Parliament Street saw five generations of the family pass through. Dore’s Butchers has been part of the fabric of Kilkenny’s social and business life since 1888, that’s 127 years.

With it’s iconic shop front, clock and pig it was a great meeting point and many a couple had a rendezvous there.

Peter simply wasn’t making money and was unable to compete with the multinationals who priced him out of the market with their specials, flooding the market.

A sign on the door on Saturday evening said that the closure was due to the further decline in business. He thanked the loyal and fantastic staff for all their hard work. He also thanked the customers for their custom, support and friendship.

“I hope we served you well and that you will have fond memories of Dore’s family butchers. The decision was not made lightly and is the hardest and saddest decision I ever had to make,” the sign said. It was signed Peter J Dore.

Peter Dore said that he was in the business of providing value and when German supermarkets were selling fillets of chicken for €2.50 while he was barely making a profit selling them for €5, he knew the writing was on the wall.

However there is one thing that Peter Dore doesn’t want and that is pity. A great shopkeeper, he is thankful for the great years he had in the shop and mindful that it gave him a living.

And on Saturday evening at 4.50pm, everyone in the shop choked up when dependable manager Pat Young, who has been in the shop for many years, told one of his older customers; “Sorry we wont be hear Monday.”

Dore’s have been synonymous with the commercial life of Kilkenny for generations, and Peter Dore epitomised all that was good about family businesses. Loyal to his staff, his customers, his photo has never been in the social pages of this or any other paper, a quiet man who loves his family and lived for his job, running Dore’s family butchers where giving value was his motto.

He received a fierce blow in 2002 when his father Paddy died. They had been together every day in the shop for nearly 30 years. Paddy was the boss at first and then Peter took over and the roles were reversed, and anyone who saw them work together could see the special bond between them.

Having worked for 25 years on High Street, I for one will miss the smile, the friendly wave, the humour and the camaraderie of a man who couldn’t say no to anyone and who kept his own counsel.

What now for Peter Dore? He will keep busy cycling, canoeing and keeping fit. However what will High Street do without him.

And maybe we are all to blame for the closure - More worried about a few cents and boosting the profits of greedy supermarkets than supporting a neighbour, one of our own.

Dore’s opened in 1888 under the auspices of PJ O’Connell, who was Peter Dore’s great, great grandad. PJ ran the shop with his son-in-law, Ted Dore.

Ted and his wife Roseanne handed it over to there son Paddy (snr). Peter’s father, also Paddy, took it over. Peter spent all his working life in the shop and his sons Mick and Pete worked with him. Alas they are the last Dore’s to have worked in the business - The fifth generation.

As in all sad tales, there is some humour. Many years ago, a particular roughish gent in Kilkenny city who trained as a butcher with Dores was, many years later, asked a question: “Is it true you’re the only pig to walk out alive from Dore’s.”