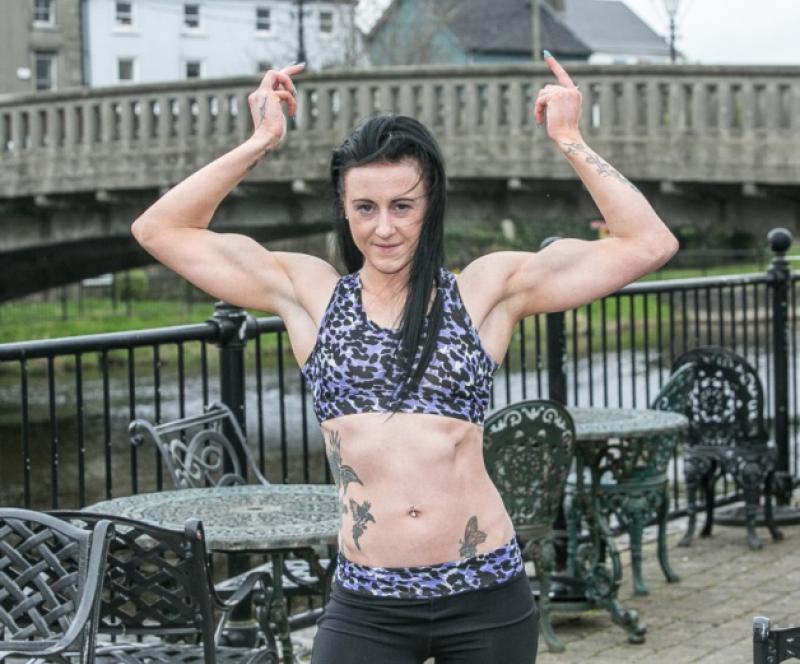 For many people, the word ‘bodybuilding’ conjures images of steriod-enhanced monsters like Arnold Schwarzenegger exchanging banter with rivals in the fascinating 1977 docudrama Pumping Iron.

For many people, the word ‘bodybuilding’ conjures images of steriod-enhanced monsters like Arnold Schwarzenegger exchanging banter with rivals in the fascinating 1977 docudrama Pumping Iron.

Kilkenny is over 5,000 miles away from the sun-soaked setting of Muscle Beach in California, but the bodybuilder culture is growing here. And it is by no means restricted to men, with many Irish women now ditching the yoga mat for the squat rack, and the glass of wine for a post-workout protein blend shake.

Kilkenny’s Claire Fisher decided to get serious about the gym around this time last year. Since then, she has taken home two silver awards from bodybuilding competitions, and turned a few heads in the process.

The 27-year-old lives in Callan with her family, who, while supportive of her, initially struggled to grasp why she wanted to do it.

“It took them a while to get used to it,” admits Claire.

“Not many people understand what it is all about, or the affects it has on the body.

“It’s a lifestyle change – all about eating clean and training hard to get the body you want,” she says.

“There is a ‘feelgood’ factor when you are in such good shape. I never thought that I would ever have six-pack, but last year I got one for the first time.”

Many women steer clear of weights in the gym, under the illusion that they will gain bulky muscle and a masculine form. The reality is that this physically will not happen without anabolic steroids and the consumption of enormous amounts of calories.

Rather, proper-form weightlifting burns hugh amounts of calories, promotes lean muscle growth and releases endorphins. Claire already knew much of this from her day job.

“I’ve been a qualified fitness instructor for three years now,” she says.

“I was working in the Hotel Kilkenny gym at the time and a guy there, who was [involved in bodybuilding] asked me if I had ever thought about it. I said ‘oh my God, no way’ – I thought I’d turn into a man.”

That was last April. Further research revealed to her the very real health benefits of weightlifting. She began training harder, and became acquainted with a Carlow-based coach, Nicoleta, at the Elite Fitness Academy. She goes to Nicoleta for advice, fitness and diet tips.

Claire’s first competition was last October, at the Wright Venue in Swords, Dublin. She managed to place second in the category of ‘Tall Female Fitness Model’.

Then, last month on March 16, she competed in Belfast with girls from all over Ireland in the ‘Miss Toned’ over-21 category. Again, she won second place – a significant achievement for a relative newcomer.

The sport is about modelling as much as anything, although most hold as dearly the journey as the destination. That destination is several fleeting minutes under bright lights on a stage, holding a variety of poses in front of a panel of judges.

To be ‘competition-ready’, says Claire, percentage bodyfat needs to be around the 10% mark (for men, it’s lower again). A very dark fake tan spray is used to accentuate muscle definition, while some competitors will dehydrate themselves to tighten their skin and improve vascularity.

“It’s the amount of work and dedication that goes in beforehand. The day is all about showing the result of that.”

For Claire, training means weightlifting five days a week, and cardio as well. She takes one full rest day on Sundays.

It’s really more of a lifestyle than a sport, however. Aside from the rigorous and relatively inflexible training schedule, there are also austere dietary requirements – the need to consume enough calories to maintain or promote muscle growth and repair, or to lower body fat accordingly.

This means lean protein, and lots of it – chicken, eggs, tuna, and artificially-flavoured protein shakes. It means low-glycaemic index carbohydrates such as brown rice and brown pasta.

“If you eat clean food Monday to Friday, you can enjoy the weekend, have a drink or whatever,” she says.

“I wouldn’t be that strict.”

It’s not cheap either. A tub of protein can cost around €60, while vitamins, other supplements and a large supply of lean meat can quickly rack up the bill.

“You have to take so many protein supplements, amino acids, vitamins. If you are not working, it becomes very expensive.”

This week she starts her new job in the Ormonde Leisure Centre, as a fitness instructor. It’s a role she would like to build on in the future.

“Since I’ve started competing, I have had people coming up to me looking for advice,” she says. “A lot of people just wouldn’t know where to start. I’ve decided to to a PT course sometime this year.”

Given the nature of both her job and hobby, it’s safe to say she will be spending a busy year in the gym. Her next competition, the Spring Classic, is on April 26, in Waterford.