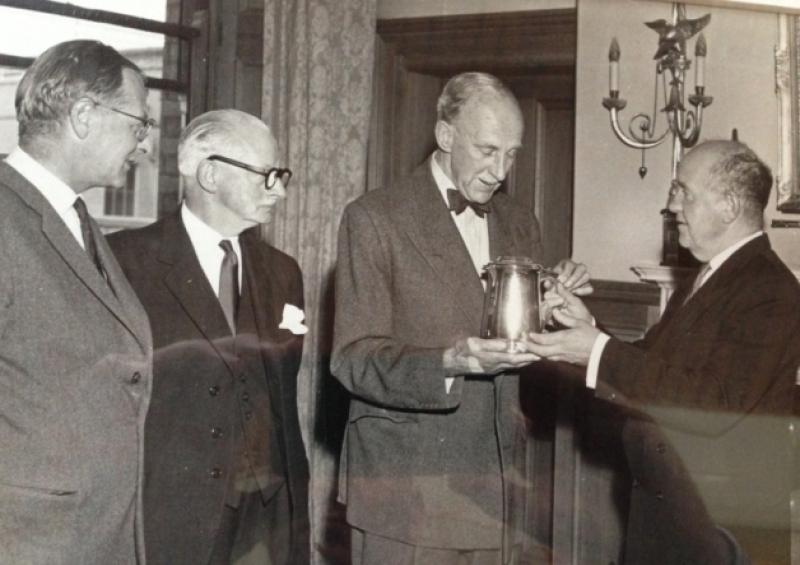 A silver tankard presented to the late Walter Smithwick in 1960 is back in the hands of the brewing family.#

A silver tankard presented to the late Walter Smithwick in 1960 is back in the hands of the brewing family.#

In a nostalgic touch, Diageo presented the 18th century tankard, to the next generation of the famous Kilkenny brewing family, Paul Smithwick on Wednesday last in the boardroom at the Guinness St James Gate headquarters in Dublin.

Incoming Diageo CEO Paul Armstrong, presented the inscribed piece to Paul Smithwick in recognition of his contribution to the Smithwick Kilkenny Brewery over many years.

It was originally presented by Guinness to the late Walter Smithwick in July 1960 to celebrate the 250th anniversary of the founding of the Kilkenny brewery. The tankard bears the inscription: Mr. Robert Ealderwood who made this tankard was uncle and guardian of Ms Sarah Jago who married on the 6th August 1753 Samuel Guinness brother of Arthur Guinness who founded the brewery in 1759.

The tankard remained in the boardroom of St. Francis Abbey Brewery until the final brew of the Smithwick brand recently.

Paul Armstrong of Diageo said the tankard had now found its true spiritual home in Kilkenny with a member of the Smithwick family who had contributed so much to the Kilkenny.

Mr Smithwick said his family greatly appreciated and valued their close connection with Guinness and Diageo and that the new visitor centre on Parliament Street would make a very important and significant contribution to the local economy. With a broad mischievous smile he advocated a far greater investment. The fourth Earl of Iveagh Edward Guinness has been a frequent visitor to Kilkenny and the Brewery.