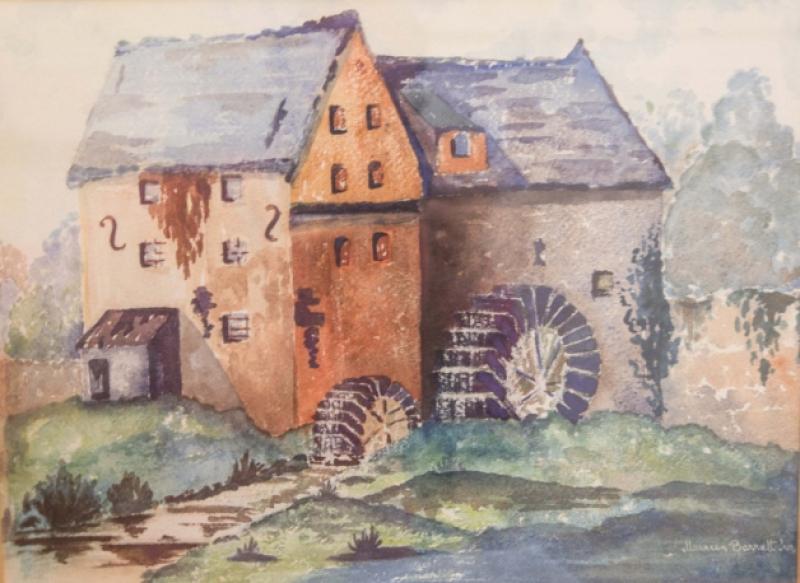 Billy Dalton is a passionate about his native city and at 89 years of age, felt compelled to contact the Kilkenny People to air his views on the “disgraceful” state of Green’s Bridge and the River Nore upstream from it.

Billy Dalton is a passionate about his native city and at 89 years of age, felt compelled to contact the Kilkenny People to air his views on the “disgraceful” state of Green’s Bridge and the River Nore upstream from it.

The man who played for the Kilkenny hurling minors in 1942 and who flew all over the Middle East representing the Royal Air Force (RAF) in swimming galas when he was a young man, said that it saddens him to look at the bridge now and to view what lies upstream.

Having served with the RAF in Palestine in the years before the Jewish state of Israel was formed in 1948, he thinks that whoever is in charge of the river should act now for the benefit of all the citizens of the city.

And he should know what’s best, he ran a successful milling business, first on the banks of the River Nore, in the shadow of Green’s Bridge, and now at Chancellor’s Mills, Freshford Road, Kilkenny from the 1960s. The successful enterprise is carried on today by his sons.

He still keeps an eye on the younger Daltons and disclosed that the grain harvest this year was good with high yields and good quality.

He has no regrets about his life and said he wouldn’t change a thing. And he is hoping that in under 11 years time he will get the cheque from the President when he reaches 100.

He contacted the Kilkenny People after reading the feature on Greens Bridge. “I just had to speak my mind about the state of the bridge and how it has been neglected and over the state of the river upstream from the bridge,” he said.

He wants the river on both sides cleaned up and all the overgrown vegetation removed. He has offered to provide the equipment for the work but was told he would not be allowed.

He was born and reared on Vicar Street and cannot understand what all the fuss about the houses there which were earmarked for demolition, However he just doesn’t know about the new bridge and feels that if Green’s Bridge had been sympathetically changed, spending the money they are now spending on the new bridge, things would have been “ok”.

“I would have preferred to see green’s Bridge brought back to its former glory but that will not happen now,” he said.

Billy’s late father, John Dalton bought the mill in the late 1800s. “He was a decent man and we all got on great with him,” Billy said of his father.

He purchased the mill and ten houses from the English owners. The mill had, at one stage, been owned by St Canice’s Cathedral and was run by the “Chancellors” from where the name derived. They also ran the Cathedral and the Close surrounding it and these people lived on Vicar Street, according to Billy

“If you stand on the bridge and look up river it is a disgrace and has been for years. It is neglected and overgrown up as far as The Dinan,” Billy opined.

Billy spoke of his past and said his loving mother was Anastasia Gaffney from Tullaroan.

He went to primary school with the nuns in the Presentation which was a “disaster” and then to the CBS.

He then went to work in the mill

He joined the RAF in 1945, Beforehand, he served his time to be a mechanic in Stathams garage, Patrick Street; “so that I would have some class of knowledge going to the RAF the following year and I went to England, training to become a flight mechanic.”

When the war ended he volunteered to go overseas and ended up in Palestine, stationed at Lydda airfield which is now known as Ben Gurion airport, just ten miles from Tel Aviv.

Asked what his role was at that time he said honestly: “The truth is, I was very much into swimming and we had a club and I spent nearly two years, flying around the middle East competing in swimming galas for the RAF. We had the use of a plane and he admitted that he did no work. He said it was a great period.#

He came home after two and a half years and was demobbed. And went into the family business.

“My memory of it was we were based in Lydda, only 30 miles from Jerusalem and the villages there then are now the cities of Gaza. We were supposed to be keeping the peace between with the Jews and the Arabs and of course in 1948, the Jews got rid of the Brits.”

He came back in 1948 and went into the mill and took over the running of the mill from his brother Michael who took a job in the brewery.

At that time we were milling for farmers who would bring in a bag of wheat and a bag of oats and we would make a bag of oatmeal for them and charge a commission on each bag. “We kept this going until 1950-51 and then got into chicken and pig feed.

The move to the Freshford Road was gradual. “We built the first store in 1960-61. It was hell of a big move and needed because of the floods in Vicar Street, which hit two or three times every year. “We haven’t looked back. We were working both places and completed the move in 1969.

“The mill in Vicar Street was run by water. We had no electricity only gas.

“The mill was destroyed unfortunately. When we moved up, Smithwicks bought it and we received £60,000 for the premises. In hindsight I wouldn’t have sold it all because it would be a lovely monument today but we needed the money ,” he admitted.

He has a great friendship with all his siblings but himself and younger Brother Frank are very close and he joined the business in 1955 and they have been together since. He lost his own wife, Nora some years ago and it was a tough blow to take but he keeps going.

Asked how he remains in such good health, he said: “What I was working at I enjoyed immensely.” He loves swimming and he learned to swim in the Sandybanks on the River Nore.

Advice: “Work is terribly important and mind your body. Exercise and with four stories in the old mill, we were up and down all day long.”

Asked if he had any regrets in life, he said: “I couldn’t improve on it.

“I did have a busy life of it and worked hard but really working wasn’t a chore it was very enjoyable. On Saturday, Billy participated in the Nore Swim and completed the 750 metres without difficulty. He’s looking forward to doing it again next year at 90 and let’s hope he stays training in the Newpark Hotel for it.