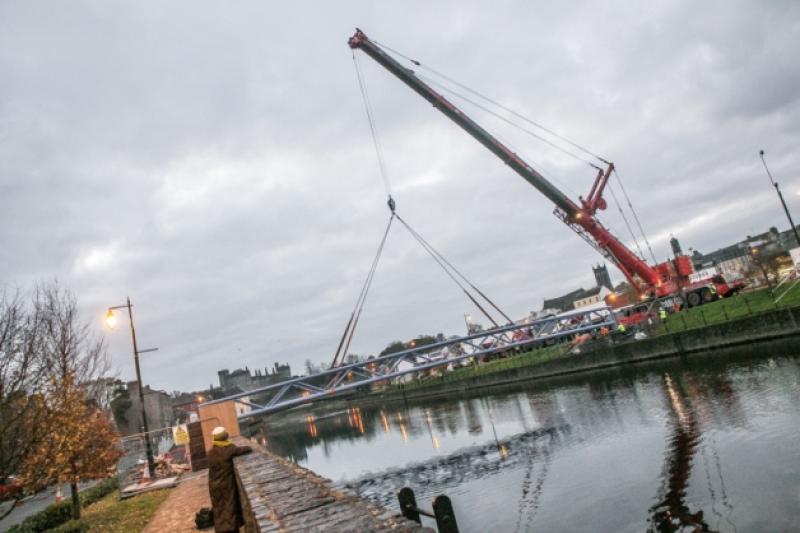 Kilkenny’s new pedestrian bridge is to be opened on January 30 – some six weeks later than the expected date – at a total cost of €600,000.

Kilkenny’s new pedestrian bridge is to be opened on January 30 – some six weeks later than the expected date – at a total cost of €600,000.

The bridge will be officially opened by Minister of State for Transport Alan Kelly and Mayor of Kilkenny Martin Brett. The structure is to be called the Lady Desart Bridge, and crosses a 35-metre span of the River Nore from Bateman Quay to John’s Quay.

It is the first bridge to be built in the city in over three decades, and is the only pedestrian bridge in the city proper. It was completely designed and made in Ireland.

Initially, it had been hoped the bridge would be opened prior to Christmas, but construction was hampered by a number of factors.

Work that should have been carried out in a workshop or off-site was not completed before the structure was hoisted into place in November. There was pressure to have it on-site before the run-up to Christmas, to avoid disruption to shoppers.

The construction crew was then attempting to carry out work such as welding in difficult wet and windy conditions over the river, and had to adopt a new approach.

It has also been clarified that the €400,000 intial costing figure referred only to construction, and was not the project’s total budget.

Director of Services at Kilkenny County Council John Mulholland said that the construction costs were around €430,000. The €600,000 figure includes preparatory work such as environmental reports, site investigation and design costings.

The bridge’s dark colour was selected to tie in with Kilkenny’s limestone. There is also to be full pedestrian connectivitybetween the bridge and the Market Yard carpark.