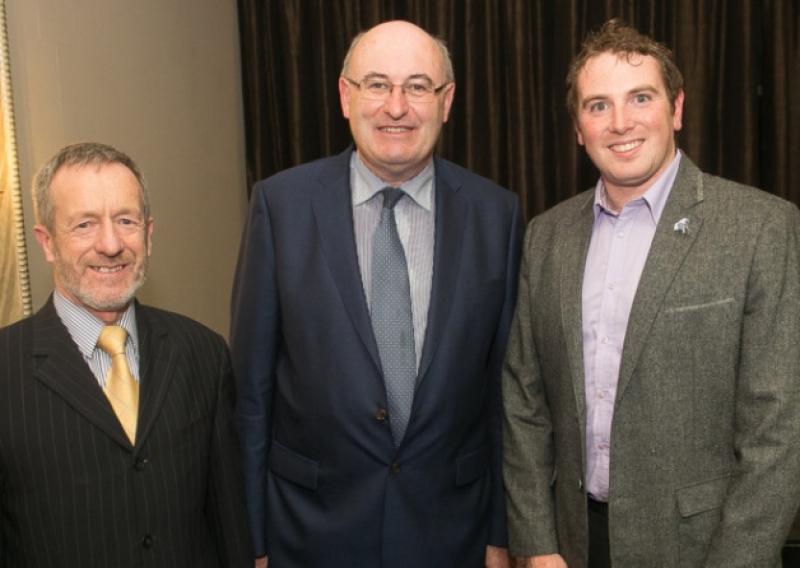 Former Minister for the Environment, Phil Hogan formerly submitted his resignation from the Oireachtas yesterday, to take up his appointment as EU Commissioner.

Former Minister for the Environment, Phil Hogan formerly submitted his resignation from the Oireachtas yesterday, to take up his appointment as EU Commissioner.

And last night he received a huge send-off from Fine Gael members at a specially convened constituency meeting in Kilkenny city. The chairperson of the Carlow-Kilkenny executive of Fine Gael, Catherine Hogan, Mooncoin (no relation) made a presentation to Mr Hogan of a statuette, depicting two hurlers.

The event in Hotel Kilkenny was attended by 300 people and a number of speakers praised Mr Hogan for his contribution to the party and to the constituency.

Former Deputy Hogan said he will take up his new job tomorrow, Saturday. “I wish to thank the people of Carlow -Kilkenny for expressing their confidence in me as their public representative over that period of time. I would also like to express my gratitude to Fine Gael, which has shown confidence since 1982. I would especially like to thank An Taoiseach for his support and confidence in nominating me as Minister for the Environment, Community and Local Government in 2011 as well as his decision to select me as the Irish nominee for membership of the European Commission.

“I hope to justify that faith, and continue to serve the people of Ireland, as I set out on a new political journey in Europe. I will cherish the many great occasions that I shared with all Members and staff of both the Oireachtas and the party over those years. I hope our paths will cross again in the future,” he added.

The Taoiseach thanked Mr Hogan for his 27 years of service in the Oireachtas and wished him well in his new role as European Commissioner.

“As a senator, Dail deputy and minister, Phil has been a diligent and strong representative of the people of Carlow-Kilkenny. Throughout this time, he was deeply committed to his various political and organisational roles within the Fine Gael party. As Minister for the Environment he implemented a huge agenda of reform, including the most radical reform of the local government system since the foundation of the state. I have no doubt that he will bring the same energy and commitment to the very important role of European Commissioner for Agriculture,” Mr Kenny said.

Already, sitting Senator, Pat O’Neill and former Mayor, Cllr David Fitzgerald are vying to succeed Mr Hogan and both have formally announced their intention to seek the party nomination for the Dail by-election which has to be held before May 1 of next year.