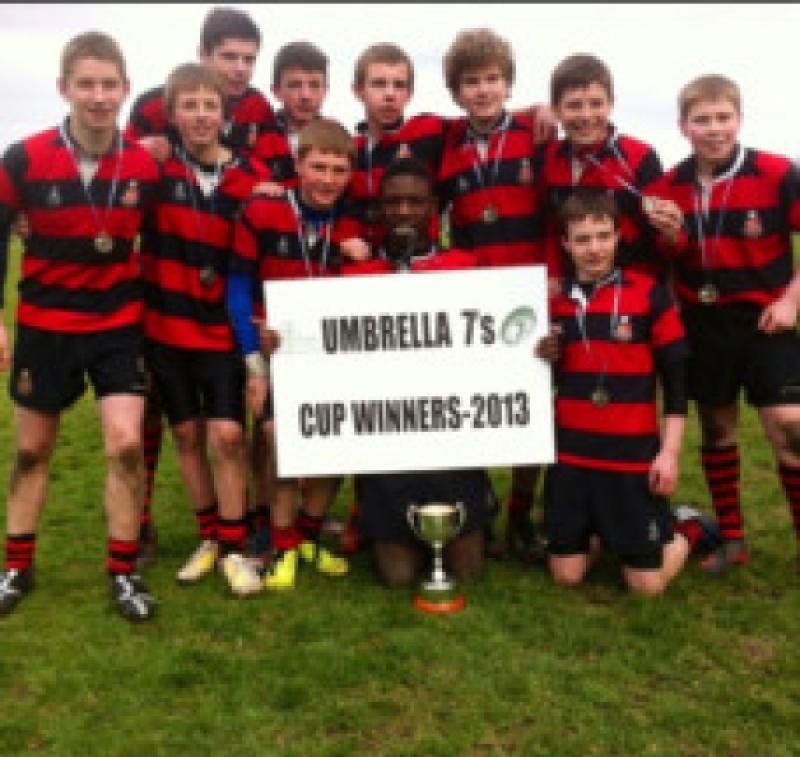 Kilkenny College conquered all round them in a rugby sevens tournament in aid of a good cause.

Kilkenny College conquered all round them in a rugby sevens tournament in aid of a good cause.

The school sent two teams to the ‘Umbrella Sevens Tournament’, which was hosted in Terenure at the beginning of March.

The Umbrella Foundation is a charity that supports vunerable children in Nepal. Between the junior and senior squads, the second and the fourth years, the students of Kilkenny College raised €1,028 towards this good cause.

The u-14s were pitched against Castleknock, Terenure and Newbridge in their group. First up were Casleknock.

With a good start in the first game, KCK were 3-0 up at half time, and head coach Mr Foley made some changes ensuring everyone got a game. The ‘College won 9-0.

While on a rest period, the college u-14s watched their two rivals Newbridge and Terenure. Terenure ran out eventual winners 5-3.

The ‘College then faced the Terenure squad, which was going to be a make or break game of the day. Whichever side won would go through, whereas the other side would be going home.

By half time, KCK were one try up, but at the start of the second half Terenure came back to even up the score with two tries a piece. However, captain Josh Miller scored a brilliant solo try from the back of a scrum to secure victory for the ‘College side

This led to the semi-finals against Terenure B and Kilkenny College ran out winners in this game ensuring a place in the final.

Given the nature of the draw Kilkenny College ended up playing Terenure A again and having beaten them by three tries to two in the first game, it was always going to be tight. The ‘College side started poorly and spent much of the game defending.

Gavin Parr eventually managed to kick through, where he picked up a bounce allowing him to go across the line. At half time, it was a tight game at 2-2 and after the break, KCK came onto the pitch and rounded up the tournament with three tries in the second half.

There were huge celebrations after the final whistle and those fourth years who got as far as the semi-finals came to support the u-14s and cheered the team on during the final which was great support. Both the team and coach were very happy with their day as were the numerous past pupils and parents who supported on the day.