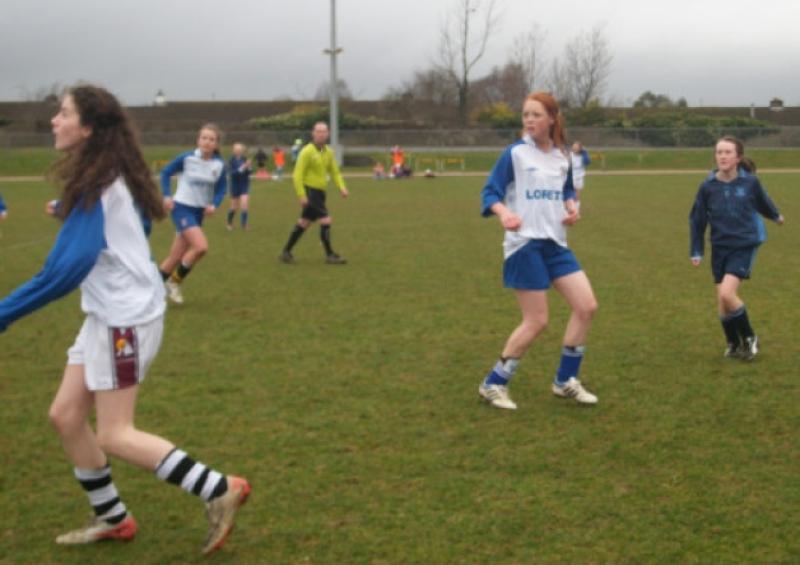 Kilkenny started off well with Lauren Gleeson scoring the first goal after five minutes. A few minutes later, she added another with a great finish with her left foot to put the Kilkenny side two goals ahead. Loreto’s third goal came from came from Beth Behan in the eighth minute. One minute later, Clara Mooney took a shot from 40 yards which ended up in Loreto Navan’s net. This was the goal of the game.

In the 15th minute, Lauren Gleeson hit her side’s fifth goal and her own personal hat-trick. A phenomenal effort from a player who was playing her first soccer match.

It was well into the second half, Eimear Mahon gave a good pass from defence to Chole O’ Grady who got to the end of the line and crossed it in and Jade O’ Connor finished to the net to a very good team goal. Indeed Chloe O’ Grady continued to torment the Navan defence for the remainder of the game.

Tara Clifford finished the scoring with a great strike from the edge of the box.

Overall it was a great team effort. Loreto’s defence held strong throughout with solid work from Caoimhe Dowling and ‘keeper Laura Tynan. Up front, Ciara Deely and Lauren Gleeson formed a lethal combination.