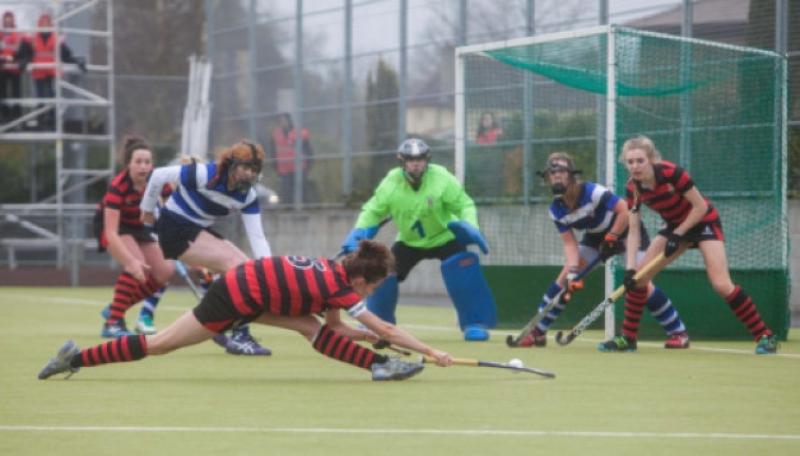 The prestigious national competition, which rotates around the provinces each year, is being held in Kilkenny over the next two days, involving the five provincial winners from across Ireland. The local side have now won their first two games against Crescent College (1-0) and Mount Anville (2-0) and have only two left to play tomorrow.

Kilkenny’s Emma Duncan got the only goal of the first game, capitalising on a penalty corner opportunity early on in the first half. But, equally, it was heroics from goalkeeper Clodagh Cassin that was the difference at full time; as well as several saves from play, she managed to stop a penalty stroke 10 minutes from the end.

The Munster champions were clearly on top during the first half, but did not capitalise at crucial moments – they failed to convert any of six penalty corners. The half-time team talk from coach Richard Willis and manager Lesley Threlfall then saw the Kilkenny girls come out and dominate the remainder of the game.

Forward Amanda Haslam will also be pleased with her day’s work. Her pace on the break and intelligent movement off the ball made her the most dangerous threat in the early match, and she continued on this form in the latter match, scoring both goals.

Kilkenny College are in action twice more in the competition: At 12pm tomorrow against Colaiste Iognaid, and then a potential tournament-decider tomorrow at 3pm in the final match – against championship favourites Lurgan College.

Following that game, the Kate Russell Cup will be presented to the winners by the President of the Irish Hockey Association Daphne Hall.

Kilkenny College secured its own place in the competition by winning the southeast cup last month. It is played as a league competition today and tomorrow, with a punishing schedule of four games in two days for each team.