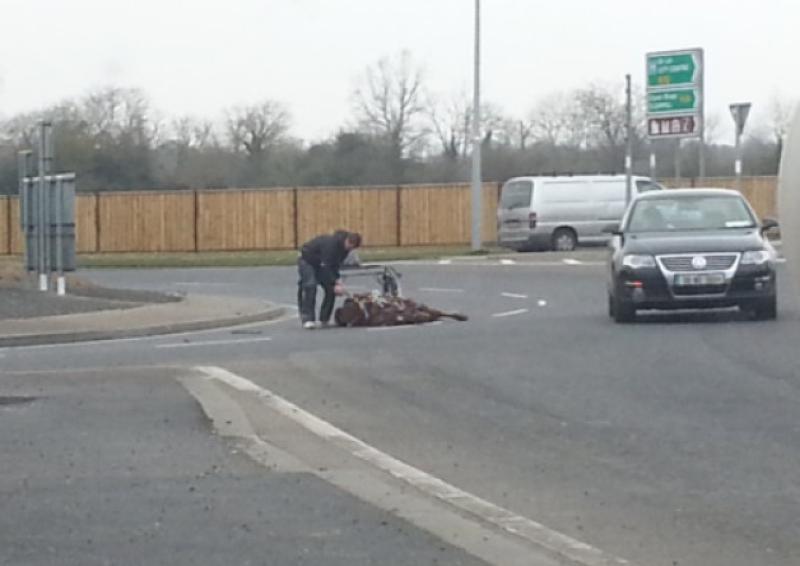 Monday afternoon in Kilkenny City, and a pony, attached to a sulky, lies collapsed on the road at the busy Hebron Road roundabout. Traffic is backed up to the Castlecomer Road as the sulky’s driver attempts to make the exhausted animal move. A few months earlier, not far from this very spot, a horse lay dying – impaled on railings near a halting site.

Monday afternoon in Kilkenny City, and a pony, attached to a sulky, lies collapsed on the road at the busy Hebron Road roundabout. Traffic is backed up to the Castlecomer Road as the sulky’s driver attempts to make the exhausted animal move. A few months earlier, not far from this very spot, a horse lay dying – impaled on railings near a halting site.

Two pictures, submitted by local people in recent weeks, will be viewed by some as shocking, and by others as nothing out of the ordinary. Recently, the Kilkenny People was criticised by one reader for publishing a picture of a dead horse dumped in a field near the Wetlands; others reacted by describing their own experiences of witnessing of animal cruelty.

Kilkenny’s rich equine heritage was once again celebrated at Cheltenham last week, as local trainer Willie Mullins further cemented his place as one of the greatest in the sport. But this is one extreme, and at the other, there is a very dark picture indeed.

This county has a legacy of neglect and, at times, sheer abuse of animals. A quick drive around the outskirts of the city reveals any number of horses, ponies and foals who have been left in the cold, on grassless wasteland, in some cases abandoned.

Then on the roads, sulkys still hold court. The concerned reader who submitted the Hebron Road Roundabout picture said it was the second such incident of which she was aware in as many weeks.

“These are recurring incidents which are happening in Kilkenny on a regular basis, and it is about time something was done to put a stop to this animal abuse once and for all,” she writes.

“Robertshill and Hebron Road are full of horses that do not have enough food to sustain them. Occasionally, during the winter, bales of hay appear in these fields and the horses are allowed a short reprieve from their dreadful situation before being left to survive on little or nothing once again.”

This is Kilkenny, from where 9% of all phone calls to the ISPCA relating to neglected or abused horses last year originated. Almost 100 of the animals had to be taken into ISPCA care – a 10% increase from the previous year. The ISPCA expects even more calls this year relating to equine care – approximately 1,700 from Ireland overall.

This is Kilkenny, a county whose former council worker tasked with collecting and caring for at-risk or abandoned horses was last year sentenced to 16 months in prison for animal cruelty. A vet found that on Joseph Moran’s own land in Meath, he had two horses in such a state of neglect that they had to be immediately euthanised – that they had suffered ‘institutional abuse’, were malnourished and lacking water. The vet also found the carcasses of five other horses, some of which had been there for some time.

“This person is totally unfit to deal with any form of animal and it would be my wish that he is banned for life from keeping horses,” said the judge at the time.

This is Kilkenny – where the bodies of dead horses can be just discarded by the roadside when they are worn out; where a panicked horse charging through traffic controlled by a young man on a rudimentary carriage is not unusual.

From the Mullins legacy, to racing at Gowran or the excellent facilities at places such as Warrington, Kilkenny has a reputation as a horse-loving county. Celebrating that, while wilfully turning a blind eye to other realities is a moral failure which hardly behooves any of us.