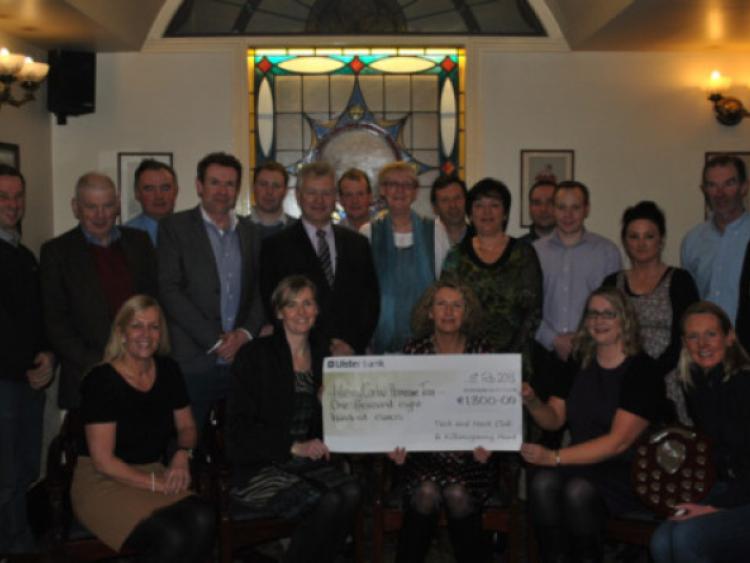 A cheque for €1,800 was presented to the Carlow/Kilkenny Home Care Team earlier this month, following a successful fundraising event organised by two local groups.

A cheque for €1,800 was presented to the Carlow/Kilkenny Home Care Team earlier this month, following a successful fundraising event organised by two local groups.

Tack & Hack Club, along with Kilmoganny Hunt, ran a sponsored ride in aid of the Carlow/Kilkenny Home Care in Killamery Woods shortly after Christmas. The ride was also in honour of a very well known and well-liked gentleman, Rory O’ Gorman.

The event, called the ‘Rory O’Gorman Sponsored Ride Out’, was a great success, and the money raised was last week presented by cheque to Dr Ian Wilson, who accepted it on behalf of the Carlow/Kilkenny Home Care Team. The gathering took place in the Club House Hotel, and special thanks must go to Jim Brennan for his hospitality on the night.

Tack & Hack Club and Kilmoganny Hunt would like to thank the following for their support and sponsorship on the day:

Thanks must also go to the following landowners for the use of their lands:

Thanks also to the riders, spectators and helpers who helped to make the ride out the success that it was. Finally, thanks to the O’Gorman Family and all in the Auld House Pub.

It is hoped that this will now be an annual fundraiser for the Carlow/Kilkenny Home Care Team and in honour of Rory O’ Gorman – a great family man, a gentleman and a good friend.