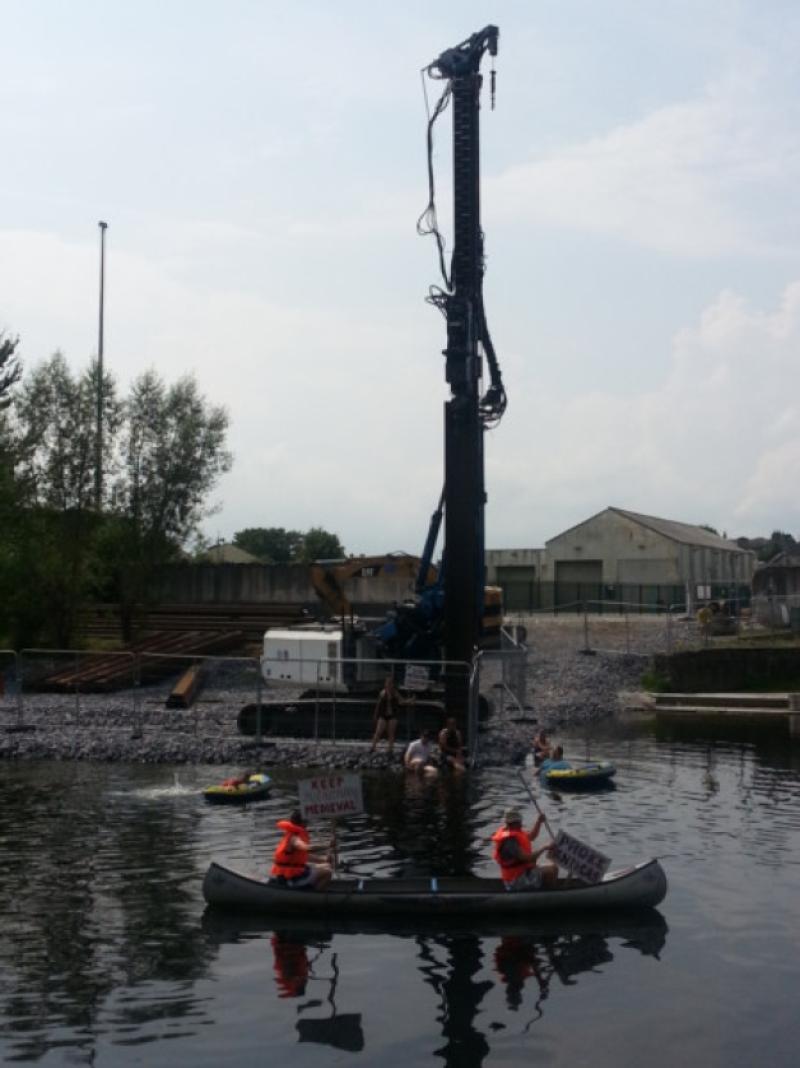 A group of protesters have entered the River Nore in Kilkenny City in a bid to halt a piledriver from working on a controversial new bridge.

A group of protesters have entered the River Nore in Kilkenny City in a bid to halt a piledriver from working on a controversial new bridge.

The construction site has been the scene of an ongoing demonstration for three weeks now, by locals and others opposed to the new 16 metre-wide bridge. This morning, heavy piledriving machinery was brought out onto the river to begin its work.

At least eight protesters – two in a canoe and six swimmers – went out to meet it. They moved in close to the piledriver, and the work was brought to a halt for over an hour. The machinery has since withdrawn from the river.

The new bridge is to have a number of columns within the river. The intallation of bridge piles is regarded by some within the protest camp as a means of precluding any possible abeyance or change to the project.

Previously, the protesters had managed to delay the entry onto the site of the equipment for a week, before a Garda operation at 4am ensured its access last Friday morning.

Speaking to the Kilkenny People this afternoon, the protesters say they feel badly let down by the move to begin operating the piledriver just two days before a council vote on a review of the project. On Tuesday, the members of Kilkenny County Council agreed to meet this Saturday morning to discuss a notice of motion calling for a review. Construction work on the new bridge was due to continue in the meantime, however, today is the first day that the piledriver has been brought to bear.

Details of the proposed review have not yet been revealed in terms of its remit, timeframe, and terms of reference, or whether it will be by internal or external means. The protesters say that any review taking place while work continues on the site would be meaningless.