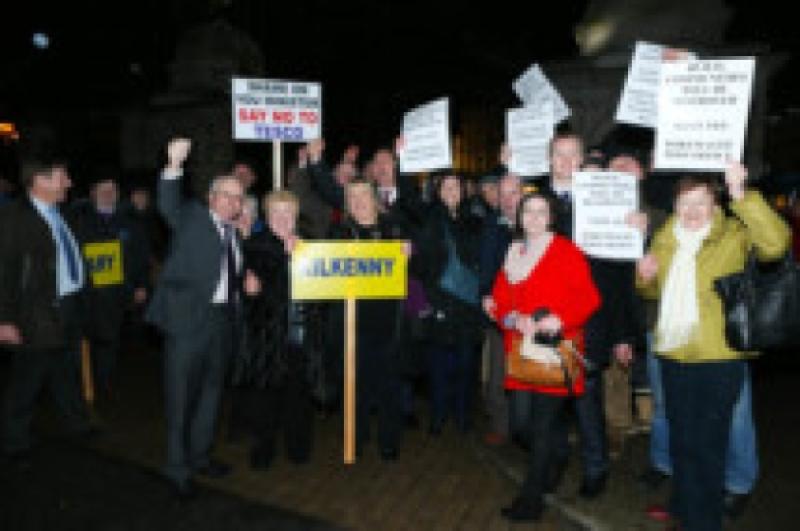 Forty postmasters from the city and county attended a rally in Dublin last week to voice their outrage at measures which they claim if implemented will shut down the vast majority of post offices.

Forty postmasters from the city and county attended a rally in Dublin last week to voice their outrage at measures which they claim if implemented will shut down the vast majority of post offices.

Chairman of the Kilkenny/Tipperary branch, Seamus Cummins of the Irish Postmasters Union (IPU) said he was ‘disgusted’ by the decision of some local TD’s who voted against a motion which the union claims would have guaranteed the future of the post office network.

“I was in the Dail for the debate and while Deputy Ann Phelan spoke eloquently in support of post offices in the end she towed the party line. The government are just kicking the ball down the line and by the time they revisit this the damage will be down.

“My customers at the post office are up in arms and I think that this will be reflected in voting patterns in the upcoming elections,” he added.

Speaking at a rally outside the Dail last week general secretary of the Irish Postmasters Union (IPU) Brian McGann said Communications Minister Pat Rabbitte’s plan to review the sector through the Cabinet sub- committee on social policy was a “recipe for doing nothing”.

At an Oireachtas committee hearing earlier in the day, Mr McGann discussed a new report, commissioned by the union, which found that if An Post lost the contract with the Department of Social Protection to pay out social welfare benefits, some 557 post offices could close. Mr McGann said that although An Post recently won this contract, the department was actively driving business out of post offices and into banks. Mr McGann said that the minister was asking the IPU and its members to “sleepwalk into a situation where the welfare payments business disappears by stealth and failure to act”.

Minister for Communications Pat Rabbitte said that the government has no plan to close post offices.

“I hope that the Cabinet Committee dealing with the future of the Irish postal network will make further progress on a whole-of-government approach to sustaining and developing that network consistent with European law. Since An Post has invested heavily in computerisation in all post offices, the network of post office contractors is well positioned to become the front office provider of choice for government and financial services sector,” he added.

Meanwhile the Kilkenny National Executive member of the Irish Postmasters’ Union, Sean Martin, has expressed his disappointment that the Government parties rejected the Dail motion.

“We know from their own published documents that the Department of Social Protection plans to reduce over-the-counter payment drastically by 2017. If that happens it will wipe out the network of Post Offices as we know it. It will devastate whole communities.

“I am calling on the Government, and Ministers Rabbitte, Burton and Hogan in particular, to sit down with An Post and the IPU and work out a plan that will ensure the continued viability of the Post Office network,” he said.