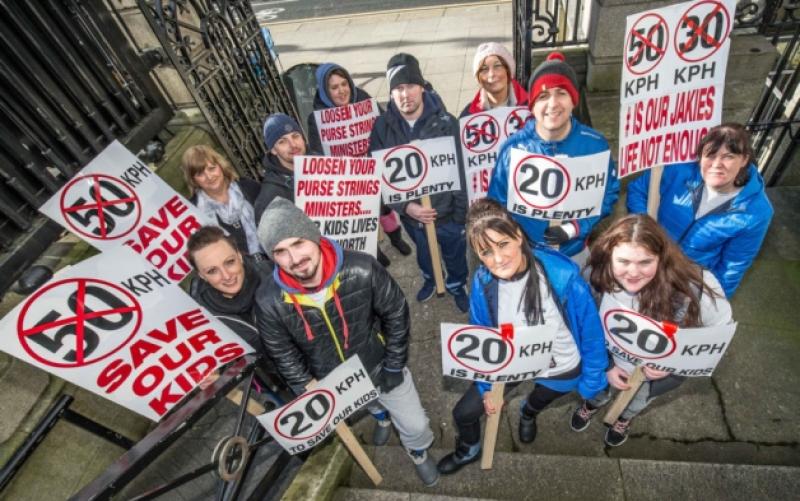 The parents of the late Jake Brennan again spent the night outside Dail Eireann last night, continuing their vigil and raising awareness of their Jake’s Legacy campaign.

The parents of the late Jake Brennan again spent the night outside Dail Eireann last night, continuing their vigil and raising awareness of their Jake’s Legacy campaign.

At time of print yesterday (Tuesday) evening, the Sinn Fein Private Members Bill – dubbed ‘Jake’s Law’ – looked likely to pass, with the Government indicating it would not oppose it. Calling for a reduction of the speed limit to 20km/h in housing estates nationally, it is due before the Dail this afternoon.

The Minister for Transport Pascal O’ Donohoe has said that under the new road traffic Bill, he would introduce the option of a 20km/h limit.

The Jake’s Legacy protest began on Sunday and has continued overnight ever since, due to finish this evening. Chris and Roseann, with around 10 supporters and family members have maintained a constant presence outside Leinter House.

They have been on chairs, with sleeping bags and umbrellas, but no overhead shelter. A number of local businesses have shown their support for the campaign, dropping off everything from coffee to pizzas to keep spirits up.

Speaking to the Kilkenny People this week, Roseann said the group was exhausted but determined to continue their demonstration.

The Sinn Féin party put forward the Road Traffic Amendment Bill for debate. It is hoped will become ‘Jake’s Law’.

Separately, the members of Kilkenny County Council have been told they will have the option of setting aside funding for a signage campaign or traffic-calming measures in estates in the upcoming roadworks programme.

As regards the Lintown Hall estate where six-year-old Jake Brennan died after being knocked down last year, progress is being made. Director of services Simon Walton has had a series of meetings with the residents group and Jake’s Legacy. On Friday, Mr Walton said that the council is progressing with a view to having the estate taken in charge.

In December, a draft traffic-calming scheme was issued to Jake’s Legacy and the Residents Association. Following feedback, a number of revisions have been made, and all parties are understood to be satisfied with it.

A schedule of works is now to be prepared and implemented parallel with the taking in charge. It is hoped this process will be completed sometime this summer.