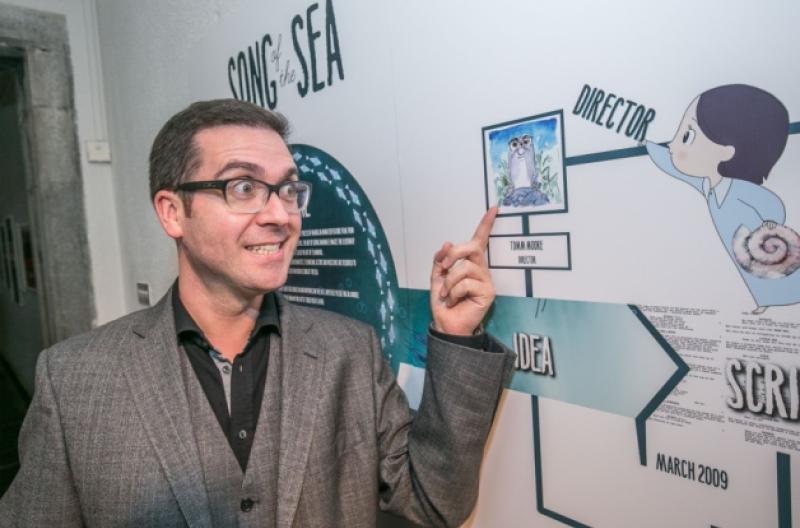 The director of the Oscar-nominated film, Song of the Sea, is urging the people of Kilkenny to ‘shop local’ by going to watch the film in the cinema.

The director of the Oscar-nominated film, Song of the Sea, is urging the people of Kilkenny to ‘shop local’ by going to watch the film in the cinema.

The movie, which was created in Kilkenny’s award-winning animation studio, Cartoon Saloon opens in cinemas this Friday.

Director Tomm Moore admits that he is ‘nervous about the Irish reaction’.

“I really hope that we get a good box office and that the Irish audience comes out and supports it. Myself and the rest of the team put our hearts and souls into it.

“It is a bit like shopping locally, by supporting it you are putting money back into your own economy. The people at the studio are living and working here so by seeing the film you are also supporting the local economy.

“We squashed a few Kilkenny landmarks into the film and also used a hurl with the Kilkenny colours,” he said.

“He was very positive about it and said it was very beautiful,” said Mr Moore adding that the President said he particularly enjoyed the passage from W.B Yeat’s poem, The Stolen Child which features in the film.

Plans are also already underway for a third film by the twice Oscar-nominated director.

“We are working on the early stages of a film set during the English Civil War. It is about when Cromwell decided he could get rid of all the wolves out of Ireland. It is set in Kilkenny in 1645 so at the moment I am spending all my time trying to conceptualise what Kilkenny looked like back then,” he said.

The studio which employs over 60 people was founded by Tomm Moore, Paul Young and Nora Twomey in 1999.

“It is on the up at the moment and feels more stable,” said Mr Moore adding that the studio is busy working on the pre-production of it’s next feature length film, The Breadwinner and the hugely popular series Puffin Rocks.

He attributes the secret to his creative success and that of the studio he co-founded to being authentic and cites his involvement in Young Irish Film Makers as being ‘a massive part of my success’.

“I try to keep it authentic and traditional. I think it is about having your own voice and allowing yourself to stand out and to not try and follow the trends. I am quietly getting more and more confident. There have been so many positive reviews for Song of the Sea. I am riding high at the moment and I am enjoying it as it might not happen again.”

Somehow one feels like this is only the start of what will continue to be both a successful and fruitful journey both for Moore himself and the studio that was founded and remains in the heart of our medieval city.