Transforming an eyesore into art magic 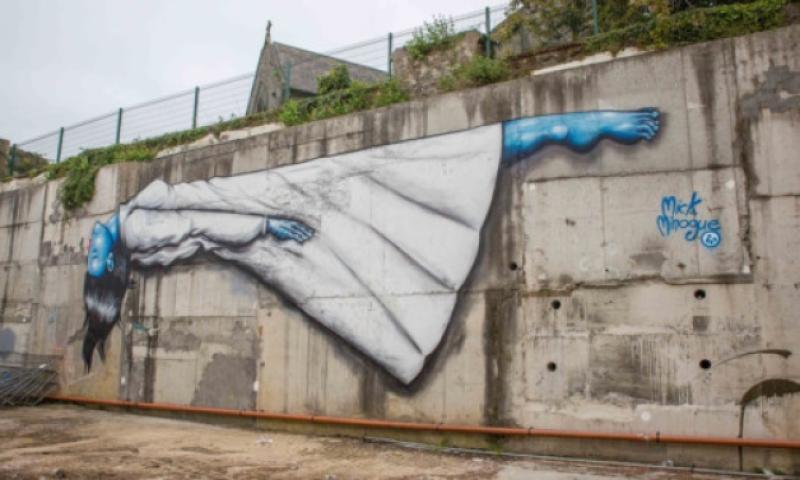 ARTIST MICK Minogue has left his stamp on many corners of the city with his impressive artwork.

ARTIST MICK Minogue has left his stamp on many corners of the city with his impressive artwork.

Underneath Ossory Bridge he created a stunning piece of visual work of a young child colouring the wall with crayons - a work be created in conjunction with Ossory Youth. Now he has taken one of the ugliest spaces in the city centre, a boarded up area on Kieran Street and transformed it into an interesting take on one of the most colourful characters associated with the city.

“I have been trying to get that space for years. I have been obsessed with Dame Alice Kyteler for years even since I saw the wax figure of her in Kytlers as a child. David Fitzgerald was one of the main players - he was the Mayor when I did the piece down at Ossory Bridge and the Kieran Street project was commissioned by Keep Kilkenny Beautiful and the shop owners on Kieran Street. I thought it was really fitting to create an art piece based on Dame Alice in that location,” he said.

Mick candidly admits that the infamous Dame accused of witchcraft is ‘one of my all time favourite nuggets’ of local history.

Dame Alice was the first woman to be accused of witch craft In Ireland in around 1300. She was somewhat of a powerful woman in Kilkenny at the time. She was briefly accused of killing her first husband with her second. From there on she became a woman shrouded by suspicions. She was accused of money lending, sacrificing animals. witch craft, sleeping with her demons and blasphemy. Dame Alice Kyteler fled the country and the remainder of her life Is a mystery. Her servant Petronella de Meath was flogged and burned at the stake on November 3, 1324.

“The mural I created hopefully remembers the tale of this amazing time in the city. At street level you see Alice as if she is laid out to be burned at the stake. Laying on top of all the wood brought to the fire. When you look through the gaps you see that she is levitating, floating away,” said Mick.

“This was an amazing commission and all thanks to certain people in the city who we’re willing to take a chance and do something different. I was commissioned by the Keep Kilkenny Beautiful volunteers and the Kieran Street Business Association to take the neglected empty lot across from Lautrec’s and do something different with it to brighten the place up. I was very humbled to be asked to take a project like this on and admired everyone involved for being so open to my suggestions and ideas. I hope creating such a large mural in the heart of the city opens peoples minds and makes them want to do something with the derelict spaces that have been popping up over the past year or two,” he added.