Hurling-mad brothers buried side by side 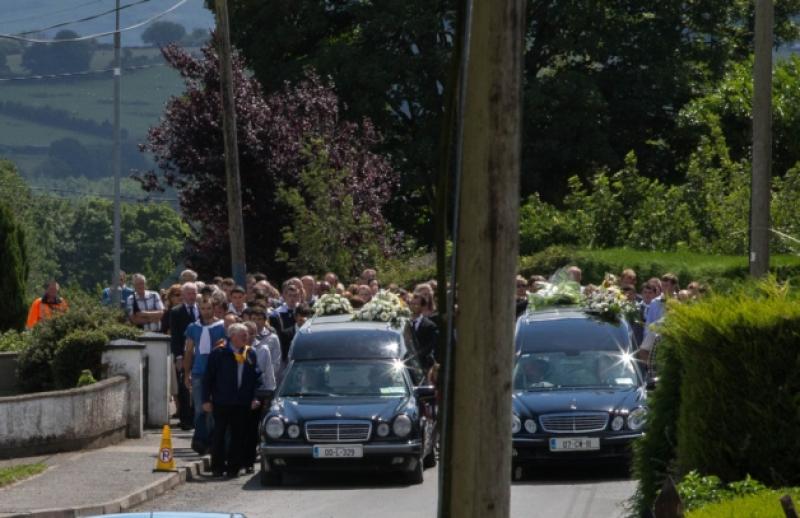 Hundreds of people attended the funeral of Eoghan and Ruairi Chada who were remembered as fun loving young boys who loved their Mam and Dad deeply.

Hundreds of people attended the funeral of Eoghan and Ruairi Chada who were remembered as fun loving young boys who loved their Mam and Dad deeply.

White hearses carrying the remains of the two boys were brought the short distance from their home to their church.

School friends and members of Ballinkillen and Fenagh GAA clubs and Nurney Soccer clubs formed a guard of honour as the popular youngsters travelled on their final journey through their home village of Ballinkillen.

Their mother Kathleen was supported by her parents Patsy and William and members of the Chada family.

The shock, grief and disbelief over the events of recent days was palpable in the quaint, rural village as people stood in solidarity with the family.

“Every day the boys lived with joy and energy, and they loved their Mam and Dad deeply,” Fr Declan Foley told mourners at St Lazarians Church.

He asked the congregation to pray for them, remember them and thank them for the ‘love and life they brought to their Mam and Dad, and all the family’. “This community has been blessed by their presence,” he added.

He acknowledged the ‘deep wounds of grief’ being carried by the two families and the wider community.

He also said on hearing of the boys’ deaths on Monday he had shared in an ‘outpouring of grief’ with their mother Kathleen and ‘it felt if the earth had quaked and the house had shook’.

Their father Sanjeev Chada remains in custody after being charged with the double murder. They boys went missing after leaving with their father to go bowling on Sunday evening. Their bodies were discovered on Monday afternoon in the boot of their father’s crashed car.