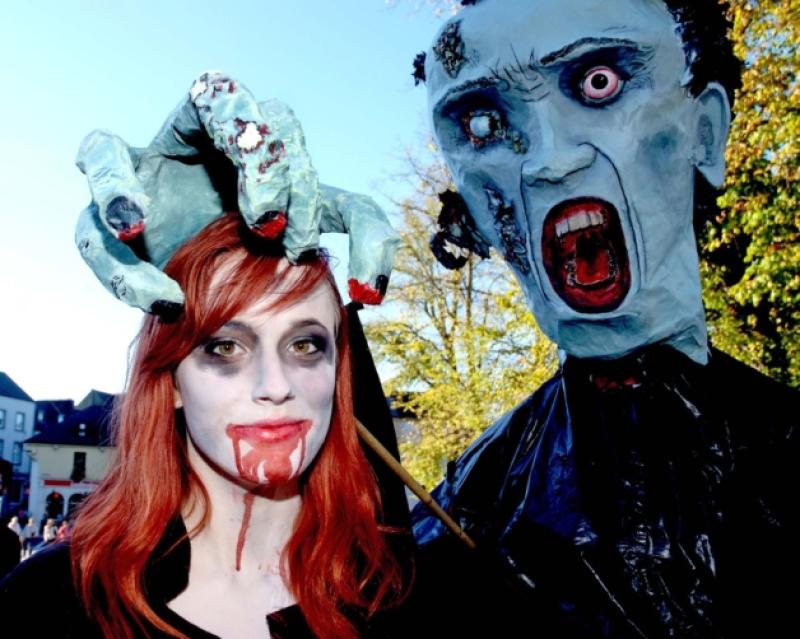 The mob descended and they were flash and scary (Flashmob). Ossory Youth’s third Thriller zombie fest on the Parade brightened up Saturday in the city centre.

The mob descended and they were flash and scary (Flashmob). Ossory Youth’s third Thriller zombie fest on the Parade brightened up Saturday in the city centre.

Locals and visitors alike were drawn to the ghoulish faces, stilt walkers and blood stained faces of the young people who enjoyed the attention. However there was a more serious side to the fun event, to raise awareness on the link between drug use and mental health, with the idea that if you are dealing with stress and pressures in a positive way, using drugs, (including alcohol), doesn’t become a negative coping strategy, which can lead to addiction and compound the problems.

Organised by Ossory Youth’s KPEG, (Kilkenny Peer Education Guerrillas). With their Macnas type parade, their enthusiasm and enjoyment made this year’s Kilkenny Drug Awareness Week youth event on the Parade a success, reflected in the numbers of people who stopped to watch the DIT samba band, stilt walkers from Stage Craft Ireland, DJ Mike Cleveland, James Corcoran wearing the giant puppet and of course the zombie dancers, choreographed by Feibhar Baldwin-Wall.

Giving young people an opportunity to develop their knowledge and understanding and enabling them to educate their peers and larger community, has many benefits to the young people themselves and their peers, but can also go someway to positively promoting young people and what they have to offer their communities. This event would not have been possible without funding from Kilkenny County Council, Kilkenny Leader Partnership, Lifeline and Ossory Youth. Huge thanks go to the volunteers organising behind the scenes and of course the young people who took part.