Clapper Bridge, graignamanagh, Kilkenny collapses after being hit by tree 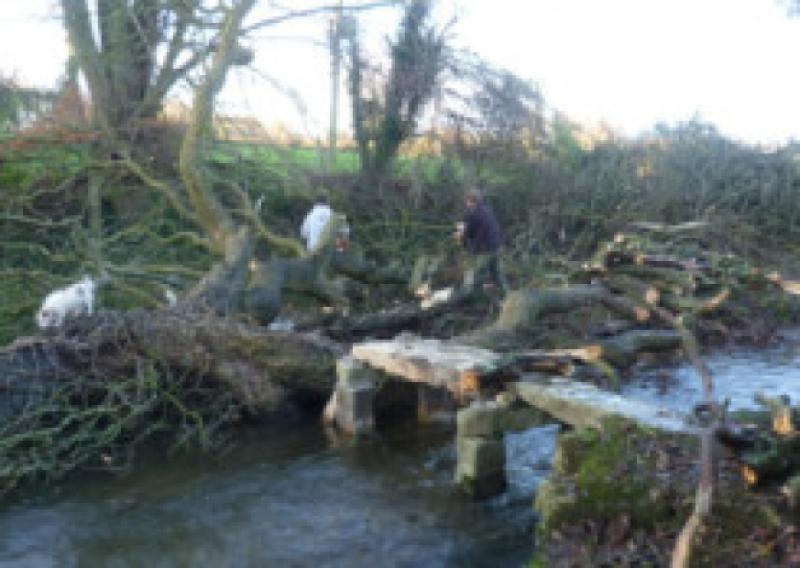 A few months after locals repaired the Clapper Bridge in Graignamanagh it has collapsed. A tree fell on it on Wednesday night and removed one section.

A few months after locals repaired the Clapper Bridge in Graignamanagh it has collapsed. A tree fell on it on Wednesday night and removed one section.

A small band of residents took matters into their own hands in September. Taking advantage of the low water levels, they restored the iconic piece of local infrastructure after the failure of statutory bodies to fix the bridge.

All that work has counted for nothing. Cllr Tommy Prendergast (Labour) said the people of Graignamanagh are very disappointed that all their hard work has been undone by the storm.

He wants Kilkenny County Council to step in and dredge the river before doing up the bridge to safeguard it for future generations. “This is part of our history and our heritage and if we don’t have respect for it, we cannot have respect for anything,” he said.

The bridge was built around 1210 by the Cistercian monks who started a water mill from water diverted from the Duiske River and used the Clapper Bridge to cross over from Duiske Abbey to the mill.

The Clapper Bridge crosses the river on the shortest, route between the 13th century abbey and what are now Cushendale Woollen Mills run by Philip Cushen.

In medieval times, the monks would bring the corn from the abbey and have it grinded in the mill, before returning with it to the abbey.

The bridge then became the walkway for the local people and remained so for hundreds of years. While the Barrow navigational has had a major impact on the lives of the people of Graignamanagh the Duiske seems closer to their hearts and hence the name Little Venice for the homes enveloping it around the centre of Graignamanagh.