Gardai called to IFA protest at Lidl in Kilkenny city 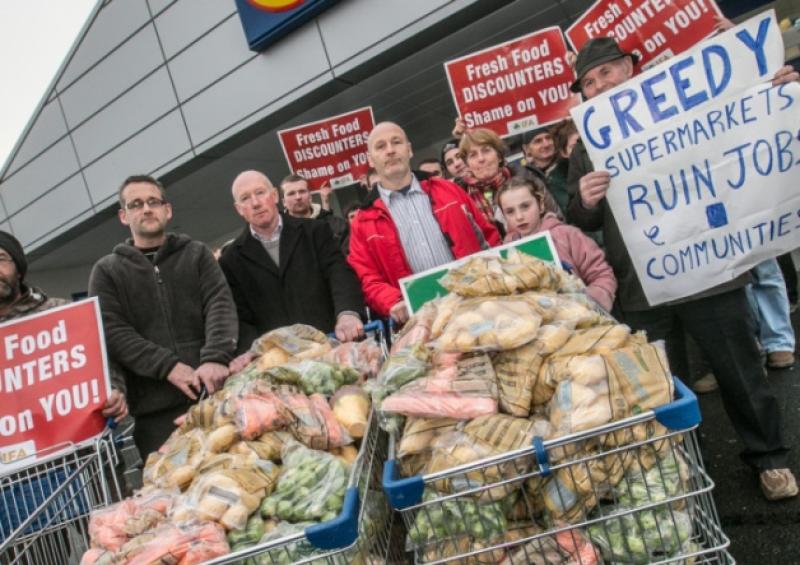 Gardai were called to the Lidl, discount supermarket on the Waterford Road, Kilkenny during a peaceful and lawful protest by vegetable growers inside and outside the store.

Gardai were called to the Lidl, discount supermarket on the Waterford Road, Kilkenny during a peaceful and lawful protest by vegetable growers inside and outside the store.

The hard pressed farmers were giving out free vegetables, which had been purchased a little earlier in Lidl, to shoppers at the store much to the annoyance of staff..

The growers, mainly from South Kilkenny as well as Gowran and Thomastown, were making a stand against what they claim is the below cost sale of vegetables.

Eddie Doyle, Mooncoin who organised the event which did not interfere with shoppers, said that Lidl would, if they continued the below cost sale of produce, put local farmers and shops out of business. He asked that they and other retail multiples level the playing pitch for all growers. “They are closing small shops and affecting rural communities and once all the other shops are gone, they’ll charge what they like for carrots, potatoes and Brussels sprouts,” he added.

He made the comments after buying two large shopping trolleys worth of vegetables in Lidl for €12.50.

There were chaotic scenes inside the shop with a staff member and a farmer involved in a shouting match after the with employee ordered the farmers to leave. They refused and started filling the trolleys before going to the check out to pay form the produce.

One of those farmers involved was Paul Farrell from Gowran who said that once Lidl had done away with the veg men, it would be the turn of beef producers and then milk producers until Lidl and other large multiples had finally killed off all competition and destroyed rural Ireland. “This cannot be allowed to happen. We have to protect our farmers and our communities,” he said.

A garda patrol car arrived on the scene and James Murphy, Inistioge, a member of the national executive of the Irish Farmers’ Association (IFA) was politely asked to attend a meeting within the store which he did.

Shoppers were delighted to receive the free produce and all said they felt the farmers were right and that they would not be buying vegetables in Lidl in future.