Plenty of time for Tommy, but no love for Labour 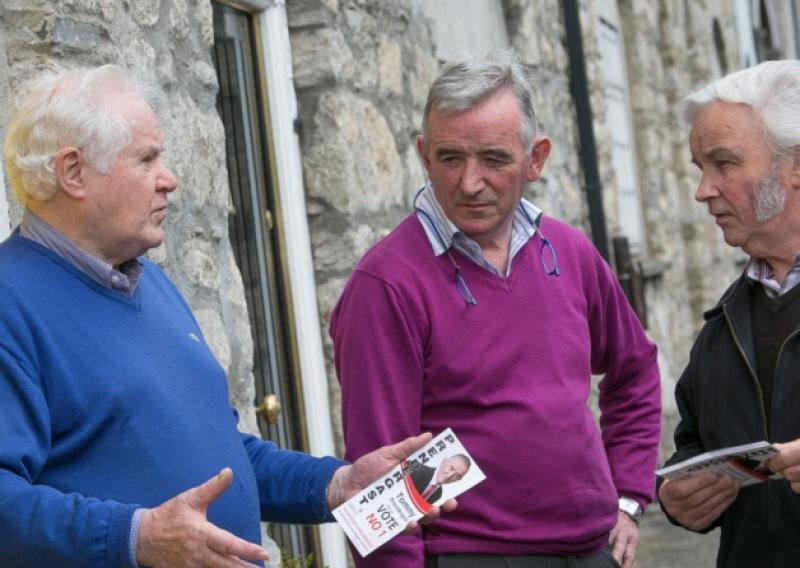 The sun is shining in beautiful Graignamanagh as we meet Tommy Prendergast and his campaign ally Willie Flood to go on a spot canvass of the town.

The sun is shining in beautiful Graignamanagh as we meet Tommy Prendergast and his campaign ally Willie Flood to go on a spot canvass of the town.

Tommy is a sitting member of the county council but has never contested an election before; he was co-opted to Ann Phelan’s seat when she became a TD in 2011. As we head for the first house, we meet the two Peter Prendergasts – one is a brother of Tommy’s, the other his first cousin. Cousin Peter is 64 and has never voted before, but he’s registered and ready to go this time.

At Christy Bolger’s house, Christy tells us he’ll vote for Tommy, but he’s got a few things to get off his chest first. He’s angry that the phone allowance was taken, angry about the lack of public transport (“I have a free pass, but what good is it to me? There’s no buses here,”), and unhappy that the public toilets are closed.

“You get plenty of tourists, but they don’t stay,” he adds.

“They come, they have a look, and then they’re gone.

Tommy reminds him that a significant village renewal scheme is about to start. There will be renovations to the streetscape, new public lighting, overhead cables are to be placed underground and so on. Good news for Graig’.

At the next house, Mary Butler is ready when we arrive; her husband Pat is in the wings. They are both well-informed on the relevant issues, and take Tommy and Willy to task over everything from water charges and the property tax, to the salaries of Government advisers.

There’s no one in Government fighting hard for ordinary people, Mary says, and it seems like the Labour Party has very little power. The debate heats up as Willie tries to refute some of her points, and reels off the figure of 70,000 jobs created.

“There are jobs – but they are all in high-tech, computer science and so on,” Mary hits back.

Pat has his own business but he is currently out sick. He says he’s paying PRSI and getting nothing. And now fuel is gone up again with the carbon tax.

Tommy comes back with ‘the country was broke when we got it’, but Mary and Pat have made it clear they have little time for the Labour Party. They do, however, have time for Cllr Tommy Prendergast, and he will get a vote not least because of his role in securing a crucial grant for the play group in which Mary is involved.

Our last stop is at the bottom of the hill, just in off the quay. Here lives Jack Bolger, of the Barrow Boys Showband fame.

Inside his house, you can see the sockets higher up the walls, the floors are all tiled. That’s because Jack’s house floods almost annually – in fact, it was flooded twice last year. He can’t get insurance.

Jack’s frustrated because Graignamanagh has on a number of occasions come close to progressing with the flood relief scheme only for it to fall through. It’s something that Tommy hopes to get back on the agenda if he is elected, to bring the local authority and the OPW to some sort of collaboration.

And with that, we call a halt to the canvassing, because it’s off to Duiske College for the official opening of new sports and education facilities. A good moment for Tommy; it’s a project he was actively involved in delivering.