Demolition under way on Vicar Street 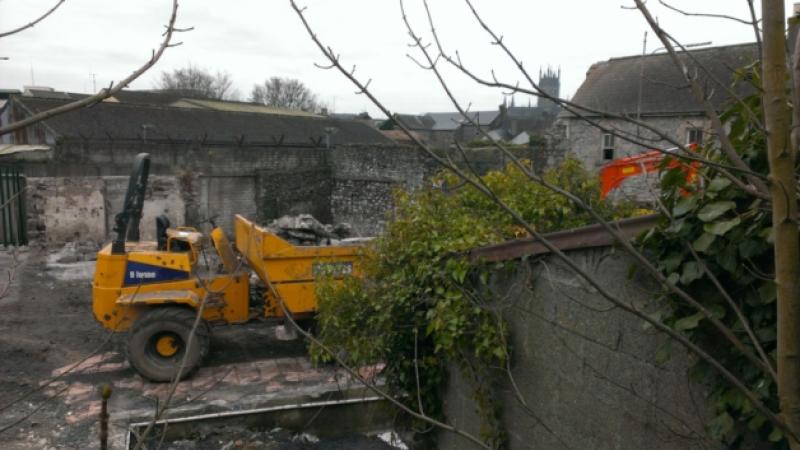 Demolition works are presently under way on the site of the Vicar Street houses in Kilkenny City, as part of the controversial Central Access Scheme project.

Demolition works are presently under way on the site of the Vicar Street houses in Kilkenny City, as part of the controversial Central Access Scheme project.

Some structures to the rear of the property have been cleared and debris removed, while there has been heightened site activity there this week inside the two buildings due for demolition. In December, Kilkenny County Council said the houses were due to be deconstructed in the first weeks of the new year. The gable wall of No 22 Vicar Street is to be retained.

The houses have been the subject of intense debate in the past 12 months, coupled with the protests against the Central Access Scheme (CAS). Protesters and some local groups want the buildings retained.

Surveys and investigations have been carried out by consultant archaeologists Valerie J Keeley Ltd and architectural and historical buildings specialist Rob Goodbody of Historic Building Consultants, under licence and supervision of the Department of Arts, Heritage and the Gaeltacht. Those surveys indicate that the houses do not date back to medieval times.

This is disputed by An Taisce, archaeologist Coilin O’ Drisceoil and the late historian John Bradley. They contend that part of the terrace is of Medieval value, and should not be demolished to make way for the CAS.

The multi-million euro project involves the construction of 700 metres of a new road across the former cattle mart and the brewery lands, with a new River Nore bridge. It was approved by An Bord Pleanála in 2011.