Update: Gardai swoop on protest site at 4am 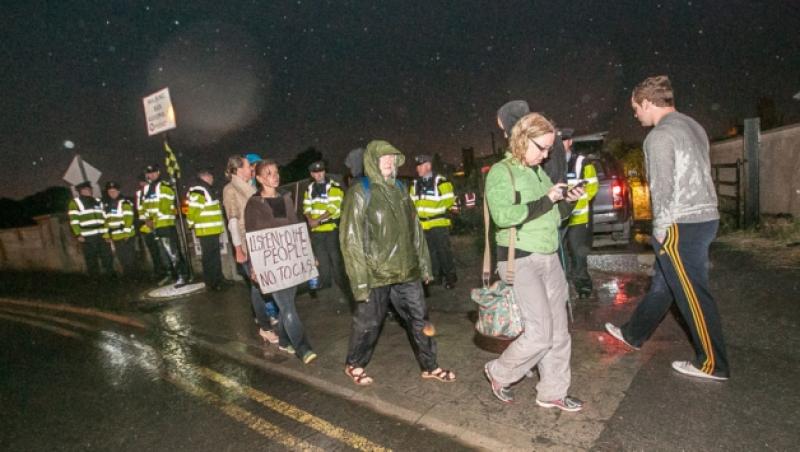 Dozens of Gardai were involved in an operation shortly after 4am this morning in Kilkenny City, where they escorted heavy pile-driving machinery onto the construction site of a new bridge.

Dozens of Gardai were involved in an operation shortly after 4am this morning in Kilkenny City, where they escorted heavy pile-driving machinery onto the construction site of a new bridge.

Protesters who oppose the development of the €10.7 million new road and bridge have maintained a continuous presence at the site since last Thursday morning. With the torrential rain in the early hours this morning, only a small number of them were present at one of the entrances to the site.

The contractor for the bridge, John Cradock Ltd, first attempted to bring the pile-driving equipment on site last Thursday, but it was turned away by protesters.

As word spread of the Garda operation this morning, more protesters began to make their way to the scene – only to find that Gardai had closed off the access roads. A number of local residents report being told they could not go through.

The anti-CAS protest group has expressed dismay at the large Garda presence and the outcome of events. They say their protest has been a peaceful one.

Activist Liz Campbell told the Kilkenny People how between 12 and 15 of the Gardai linked arms and marched out from the site entrance towards Greens Bridge. She said that despite the machinery now on site, opposition to the project would continue.

“It is not over – we still need a review and we need our councillors to listen,” she said.

“Where is the Mayor of Kilkenny City? He has not been down here once.”

Large fences have now been put up at the site entrances. A statement from the Gardai said that a peaceful protest had taken place and there were no public order incidents or arrests.

“An Garda Síochána has a role in ensuring peaceful protest can take place, and also in preventing injury and protecting life,” said the statement. “Our objective with any such operation is to ensure the safety of the public.”

Local Green Party councillor Malcolm Noonan, who opposes the project and was present on the site this morning, said it was ‘a sad day for whatever shred of local democracy we had left here in Kilkenny’.

Around 40 demonstrators are present at the scene this afternoon, split between entrances at Vicar Street and at Greensbridge Street. A delegation of the anti-CAS groups will make a presentation on Monday to Kilkenny County Council.