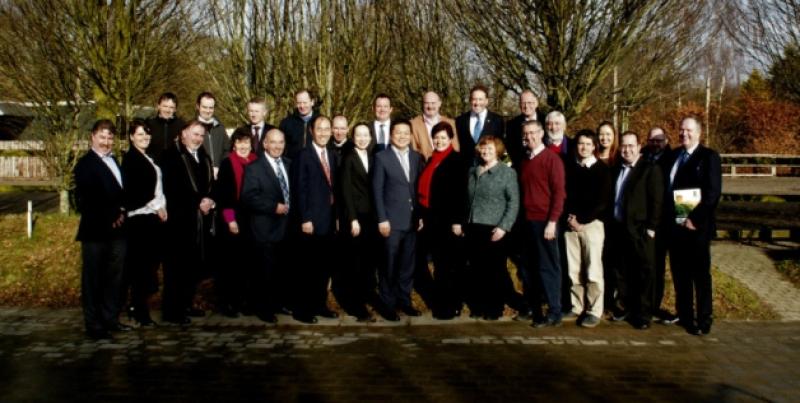 A Chinese firm has just signed contracts with Kilkenny LEADER to begin a trial to bring the latest in broadband technology to rual north kilkenny - benefitting homeowners, farmers and local business.

A Chinese firm has just signed contracts with Kilkenny LEADER to begin a trial to bring the latest in broadband technology to rual north kilkenny - benefitting homeowners, farmers and local business.

Local LEADER CEO Declan Rice confirmed that trials, at no cost to LEADER will commence shortly and that should they be successful - high speed broadband is on the way - assuring local people that it will cost “no more than” there present service provider.

The technical trial, testing a new service to rural areas will be initiated in northwest Kilkenny before summer with areas such as Gathabawn, Crosspatrick, Woodsgift, Tullaroan, Johnstown and Urlingford on the list.

“We’re taking a leading role in bringing broadband to rural communitues. We’ve look at boththe cost and quality of delivery,” said Mr Rice who revealled that they have gone from Cnina, to Finland to the UK to find the relevant technology - and the Chinese firm has the ability to beat the standard of ‘30mbs down, 10mbs’ up speed by multiples.

“China is also very rural and vast numbers of population live in very rural areas. This technology can send signals over 15kms, compared to the present 1km or so and nby triangulating they can really get a strong signal,” he added.

LEADER Companies in twelve other areas of the country are following Kilkenny’s lead and will also facilitate pilot trials in their areas which will offer ‘next generation access’ (NGA) standard broadband coverage.

Minister for Rural Affairs, Ann Phelan TD attended the historic event and wished the Chinese and Irish partners well with the pilots which have obvious potential of aiding her brief in delivering the CEDRA report.

The LEADER Companies decided to launch the innovative project, because while they welcome and support the aspiration of the state’s National Broadband Plan to provide high-speed broadband to all rural Ireland by 2020, they are concerned at possible delays in delivery to that timeline. Moreover as community-based companies LEADER has become increasingly concerned at the tangible consequences of the digital isolation of rural Ireland’s businesses and residentsKilkenny LEADER Chairperson Denis Drennan, summarises the position, “Rural Ireland’s communities cannot afford in either economic or social terms, to wait on others- no matter how well-intentioned to address the broadband gap”. LEADER’s proactively work to address the deficit immediately led to the contact with Wuhan Vstar and following discussions to the cooperation agreement.

The technology pioneered in the trial is wireless-based but recent innovations offer much higher average speeds. Used throughout rural China, the Vstar system has recently been exported to Australia. Ireland will be the first country in Europe to see its introduction. While the technology is pioneering its basis is still well-understood and will be fully regulated and within the cautious health and safety guidelines of the state and to international best practice. The technological advances also mean that there is much less reliance on multiple masts than is currently the case. Denis Drennan states, “The potential of the broadband trial are enormous- not just for northwest Kilkenny- but for rural Ireland in general.” Research is advanced as LEADER companies will work with businesses and communities in the trial area.