Vixen Minnie is pregnant by Foxy Henry in Kilkenny 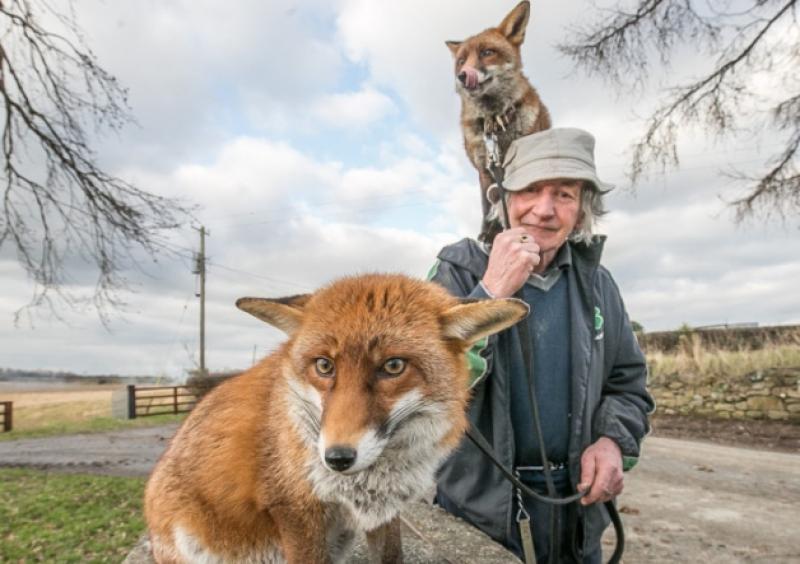 Caring for three foxes is a labour of love for Kilkenny’s answer to Dr Dolittle but what’s going to happen when Minnie gives birth? The little vixen brought to the “animal sanctuary” in Colmcille, outside Thomastown after her mother was hit by a car while carrying Minnie, then aged two days, is about to give birth.

Caring for three foxes is a labour of love for Kilkenny’s answer to Dr Dolittle but what’s going to happen when Minnie gives birth? The little vixen brought to the “animal sanctuary” in Colmcille, outside Thomastown after her mother was hit by a car while carrying Minnie, then aged two days, is about to give birth.

And while her minder, Patsy Gibbons has achieved international fame as the carer of the skulk of foxes, he retains the simple philosophy of helping others. His way of life and his deep love of nature gives him the authority to criticise those who shoot or hunt foxes. “They never leave them alone,” he said. He is not a Crusader just a man who lives by simple truths.

His extraordinary love affair with all things vulpine began when a neighbour found an emaciated little vixen in a box at St Columba’s Hospital, Thomastown. Patsy named her Grainne (from Irish mythology’s Diarmuid agus Grainne) and not long after, Minnie arrived.

But the family was completed when Henry (named after Henry Shefflin) who was almost killed by dogs in Graignamanagh, was brought to Colmcille by concerned Danny Foley. Although badly scarred and under weight, Patsy nursed him back to health. Henry is in great form and about to become a dad for the first time after mating with Minnie.

The three who get along famously. Each evening they come into the house around 5pm and after being fed at 10, are back in their luxurious pen by midnight when they finish watching Vincent Browne on TV3.

The trio of “sionnachs” are fed a diet of boiled chicken legs and beef mince and you wouldn’t blame them for wanting to stay with Patsy.

While he encourages visitors to his home, especially school children and their parents, Patsy has become concerned at people picking up cubs and bringing them home, thinking they have been abandoned. “It’s normal for the mother to leave the cubs alone in a field while she hunts and she always knows where they are and always comes back,” he said.

Patsy, who is Kilkenny’s answer to the Dalai Lama, because of his passive and friendly demeanour and love of his fellow man, has more reason than most to dislike foxes because one of them has killed and eaten 17 of his ducks in recent weeks and also consumed a number of his hens. “It’s easy get another duck, anyway it was my own fault, there was a hole in the ditch,” he said.

The area is full of foxes and the local terrain offers great cover with nearby Kilfane Wood very popular with them.

Patsy said that another good spot for foxes was under St Columba’s Hospital. He added that, three years ago there were 38 cubs born in the immediate vicinity.

Unfortunately, Patsy’s B&B for foxes is full and he can’t take any more injured animals for the moment but you are free to come and visit and you’d never know, you might leave with a free, half dozen duck eggs too.