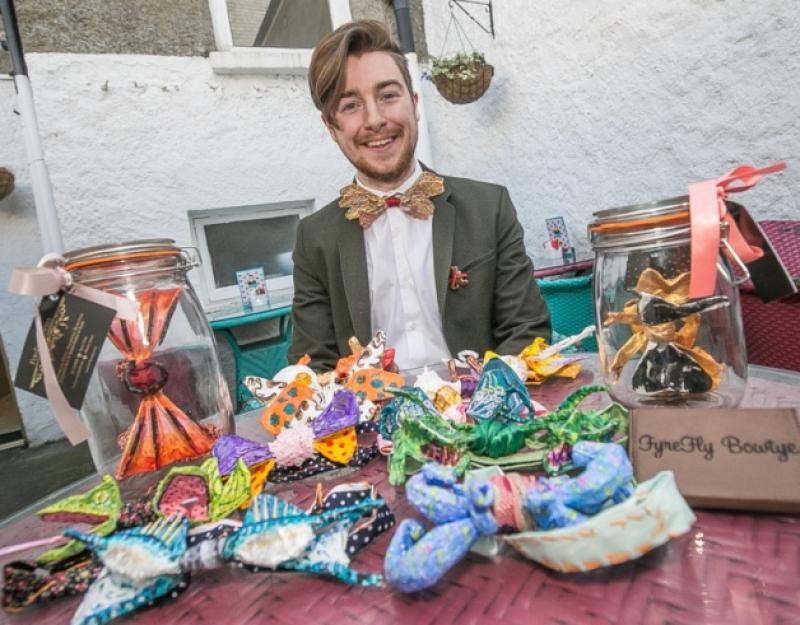 Stunning bowties crafted with flair and inspired by passion and imagination are the creation of a Kilkennyman who has decided to set up his own company using both his artistic talents and his business skill.

Stunning bowties crafted with flair and inspired by passion and imagination are the creation of a Kilkennyman who has decided to set up his own company using both his artistic talents and his business skill.

Garron Clarke from Callan designs and makes stunning bowties using paper mache, wire and paint. Each design is carefully crafted and is both a stunning accessory for any outfit as well as been a beautiful piece of visual art.

The 23-year-old studied Marketing and Innovation Technology at Dublin City University and intends on doing a Masters Degree in Digital Marketing next September.

“I originally wanted to study art but I changed my mind and I felt at the time that it was safer to have a business degree with marketing.

“After graduating I applied for countless jobs from May until Christmas but I had no joy and I was getting a bit down so I decided to do something different.

“I was always into bowties and being creative and interested in crafts and I decided to use my business degree and my love of art and claymodelling and painting and use both of my strong sides and I came up with the idea for fyreflybowties. My artistic flair always comes out and it is where my passion lies,” he said.

The affable young man has been working on developing his business idea since Christmas and hopes to launch the company officially over the coming weeks.

Almost as a throwaway remark Garron tells me that the part of the idea emanated from the symbolic meaning bowties possess for him. A gay man, Garron shared how he still feels fearful on occasion because of how parts of our society are not still not truely open and accepting of people of all sexual orientations.

Garron was presented with the Presidents Award for Ethics in 2014, which was designed by President Michael D. Higgins. The award is given to the person who for the most substantial reason, makes the greatest contribution to ethical debate in Ireland within the year. Garron’s statement of ethics was - ‘We need to talk about ethics because I’m gay and I’m still afraid’.

Garron explains that for him wearing bowties was a small but meaningful form of expression.

“I used fashion and art to express myself and have bought bowties from all over the world. For me bowties allowed me to say something about the person I am.”

Garron will launch his Fyreflybowties next month and impressively has managed to start up his own company on a budget of a mere €500.

“I will make around ten pieces a month. I come up with my own designs but I can also do custom order pieces or make a piece around a specific theme.

“Firstly I come up with a concept and the actual making of the piece might take five to six hours. My ideas often come from nature and the name of the company comes from a firefly. For me bowties symbolise wings which in turn symbolise freedom.

“The pieces are constructed firstly out of steel wire which is used to make a base and then I use masting tape to outline the profile and then I use paper mache and finally the piece is painted and material and ribbon is sewn together to make the tie. Every new bowtie puts a smile on my face and each piece is an original work of art and is a once off. All the pieces are placed in jars and this symbolises the firefly in jar and the concept of transience,” he adds.

The finished pieces are visually stunning and are unique and colourful and are authentic one-off pieces of art and fashion. They can be ordered online from www.fyreflybowtye.com and are shipped worldwide free of charge.