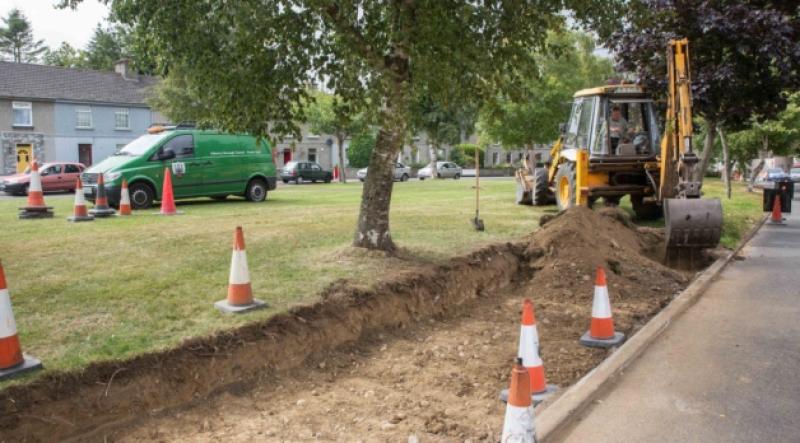 Residents at St Fiacre’s Place have been expressing their anger and frustration this week as Kilkenny Borough Council begins to cut out chunks of the area’s green space to make way for parking bays.

Residents at St Fiacre’s Place have been expressing their anger and frustration this week as Kilkenny Borough Council begins to cut out chunks of the area’s green space to make way for parking bays.

The large central patch of grass and trees has been used for decades as a play area for children and a common area for the whole local community. Recently, it was used to host a special mass for 300 people to celebrate the sixtieth anniversary of the houses’ blessing.

A JCB and several council workers arrived on Wednesday morning and began to remove large parts of the green. They intend to put in four parking bays, each big enough for three cars.

But a number of residents say that the new parking spaces are unnecessary, will detract from the area’s visual aesthetics, reduce driver and pedestrian visibility – and may in fact be a danger to children playing. Several have also expressed anger with the level of consultation they received.

One local man, Ambrose Prendergast, says that while the work had been talked about in the past, they were not aware it was definitely about to happen until a note was put through the letterbox on Monday afternoon. The letter was not signed by anyone in the council, nor is there any name or contact information supplied.

“We have repeatedly asked for some proper consultation on this,” says Mr Prendergast.

“All I want is for a residents’ meeting – for us to have our say. The council know that there are a lot of objections to this.

“We don’t want our green chopped up. We like things the way they are.”

He says he has spoken to councillors about the issue, but nothing has been done.

Some residents who required parking in the past opted to tarmac their front gardens, and keep their cars there. Others park up at the path to the front of their houses.

When the JCB arrived, one resident, Mary Lanigan, went to speak to the workers about what they were doing. She told them that children played on the green and she was concerned for their safety. She says she was told by one worker that the children had no entitlement to play on the space.

“We’ve been here 60 years – our children played on the green, and our grandchildren are playing on it now,” she said.

“I’m very frustrated. Why is money being spent on this?”