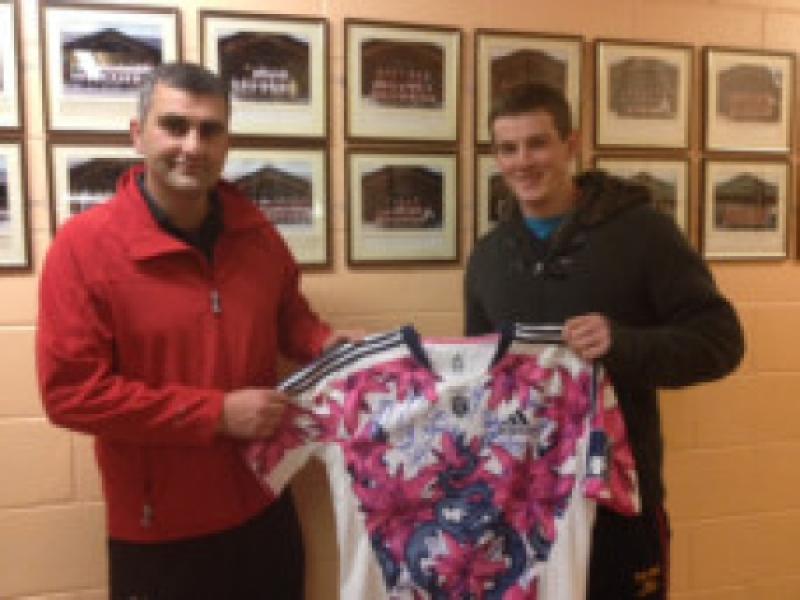 Rugby star Peter Lydon was back in his home town last week, where he visited his old school, Kilkenny College, to present a signed jersey.

Rugby star Peter Lydon was back in his home town last week, where he visited his old school, Kilkenny College, to present a signed jersey.

Last September, Peter made his debut for French club Stade Francais. A former member of Kilkenny RFC, he finished in Kilkenny College in 2011, played with Leinster u19s, Lansdowne u20s and Seapoint Rugby Club, before being offered an academy spot with Stade. He has played in Amlin Cup Rugby and the Top 14, and has also assumed kicking responsibilities.

As the Autumn Rugby Internationals continue, Kilkenny College can reflect on the success that the rugby department has had with players making their way in the professional game. Peter is one of three students who have developed into professional rugby players in recent years.

Robin Copeland, who left Kilkenny College in 2006 has been attracting a lot of media coverage and plaudits this year for his success as an athletic, mobile, ball-carrying back row forward. He is now in his second season with Cardiff Blues, and there have been several calls in the national media for him to be included in the Irish squad.

Craig Ronaldson left school in 2008 and went to Lansdowne playing at u19 and u20 level. He also represented Ireland at club level. Craig had success last season with Lansdowne winning the AIL, scoring 206 points in the season. Last May, Connacht offered him a year long contract. They have since extended his contract by a further two years.

All three young men have stayed close to their former school. All three have presented jerseys to the school, and remain in close contact with their former coaches and teachers.