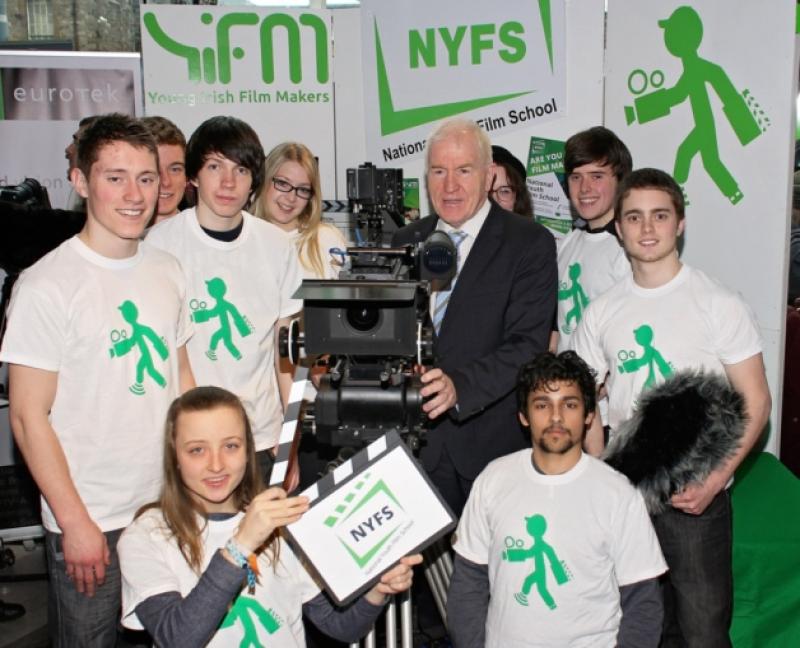 Young film making talent from all over the country will apply for thirty coveted places at the National Youth Film School 2014, hosted by YIFM in Kilkenny.

Young film making talent from all over the country will apply for thirty coveted places at the National Youth Film School 2014, hosted by YIFM in Kilkenny.

Minister for Arts, Jimmy Deenihan officially launched this exciting new programme last week at the innovative Digital Biscuit which was held at the Science Gallery, at Trinity College Dublin.

YIFM have teamed up with IADT Dun Laoughaire and the Irish Film Industry to create the course.

Industry backing for the film school comes from the Irish Film Board, Screen Training Ireland, the Screen Directors Guild, Screen Producers Ireland and Film Base.

Minister Deenihan cited the governments support of both the Arts and film making, along with providing the work place with skilled and talented young people working in film who can benefit from future economic investments in that area.

The former Kerry football star has eight film documentaries to his name so he has worked both behind and in front of the camera as a Sports star and politician.

For Young Irish Film Makers it was truly an historic occasion. Gaining nationalr recognition with their latest academic course being launched in Dublin shows just how far they have come - and how well they are respected - in the last 21 years.

Just over two decades ago, Mike Kelly founded Young Irish Film Makers, opening doors for local kids right from then start to display their talents. Oscar nominated animator Tomm Moore was one of the first to attend Young Irish Film Makers and along with Paul Young from Cartoon Saloon was present at the launch. Also present was local TD Ann Phelan.

“The National Youth Film School will be of great benefit to young film makers,” Minister Deenihan said at the launch adding “It is the first industry backed, nationally co-coordinated programme for young Irish film talent consisting of master-classes, career coaching, hands-on sessions and engagement with current industry professionals. It will equip participants with the practical knowledge, skills and contacts to ensure they are fully supported through high-level training to become a key part of the Irish film industry.”

Speaking of a bright future for the film industry he added “Production activity in the Irish film industry was worth €168m to the economy last year, and there is no doubt that this programme will have a very positive impact on the industry in the years ahead.”

60 young people will be called to attend industry master classes at Easter and 30 budding filmmakers will be chosen to attend a week long training and production workshop during the summer.

The call is out for young film making talent (16-19yrs) to take part in this unique opportunity for any young person planning a career in Film or Television. You can register now for The National Youth Film School on www.yifm.com to make sure you get your place.