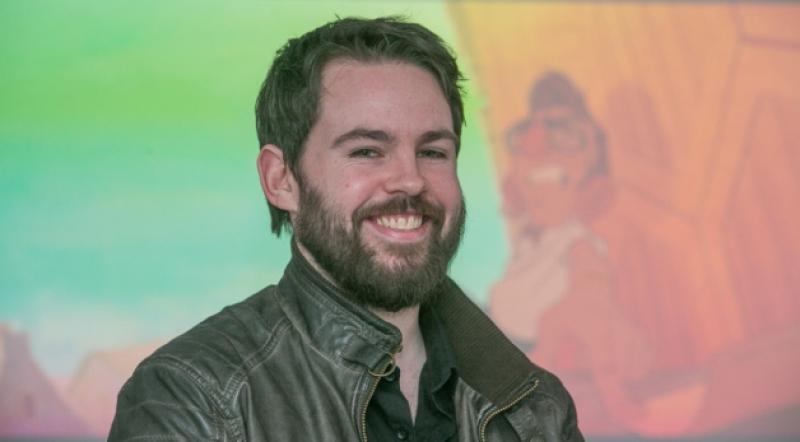 A film by a Kilkenny-based artist has been shortlisted for the prestigious Jameson Dublin International Film Festival which takes place next month.

A film by a Kilkenny-based artist has been shortlisted for the prestigious Jameson Dublin International Film Festival which takes place next month.

Paul Ó Muiris, who has been working at the Oscar-nominated animation studio, Cartoon Saloon since 2011 premiered his film The Ledge End of Phil (from accounting) at the Galway film Fleadh last year.

He was delighted to discover that his film was selected for the festival.

The film tells the story of Phil, an uptight office worker who gets trapped outside on the ledge of his building.

“Phil quickly realises his only hope of getting back inside is a seagull who has been trapped in the office. On the ledge, trapped between two worlds; the safety of the interior world versus the danger of the exterior, Phil needs to choose which side to embrace”

Paul is also currently in the process of writing his first feature film, which is set in early 20th century Ireland and is about about a young girl exploring the concept of identity.

The talented artist has also been nominated alongside his colleague at Cartoon Saloon Stefano Scapolan (who painted the beautiful backgrounds you see in the film) for the CINE Talent award which aims to celebrate emerging Irish talent.

Cartoon Saloon have nominated Paul Ó Muiris and Stefano Scapolan for their dedication, creativity and huge talent displayed during the production of The Ledge End of Phil (from Accounting). The winner will be announced during this year’s festival.

Phil will be screened in the Official Irish Selection on February 14 at 6.30pm in the Lighthouse Cinema. For tickets see www.JDIFF.com

For more information on the Ledge End of Phil, you can check out the weekly production blog at: www.ledge-end-of-phil.blogspot.ie