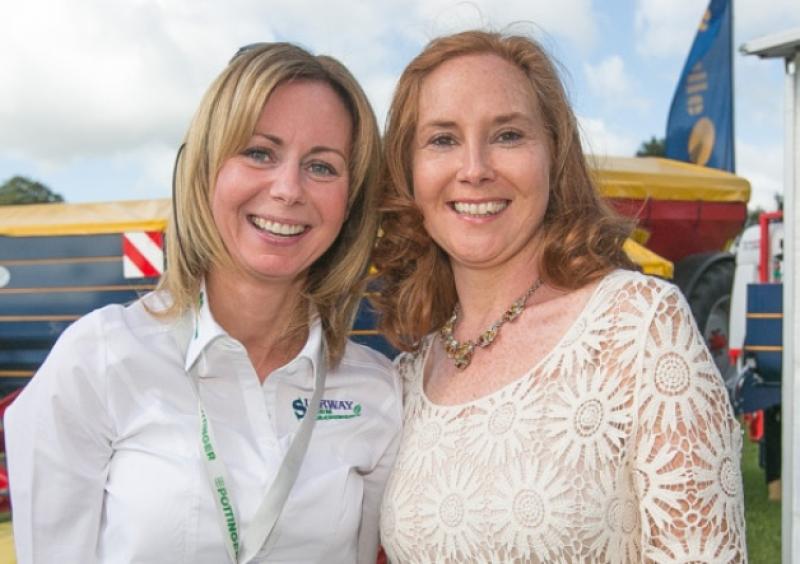 The weather certainly played its part to help make the 188th Iverk show one of the best ever. The sun shone on the showgrounds in Piltown and the atmosphere was relaxed for the record crowd with lots to see and do making the show the final family hurrah before going back to school.

The weather certainly played its part to help make the 188th Iverk show one of the best ever. The sun shone on the showgrounds in Piltown and the atmosphere was relaxed for the record crowd with lots to see and do making the show the final family hurrah before going back to school.

There was no repeat of last year’s drama in the Great Cherry Cake competition where chef and culinary expert, Edward Hayden helped judge the competition. In the end, Piltown native, Josephine Burke, Turkstown, barely lost out to Martina Cullinan, Clonmel.

And it was hard to avoid politicians as they gear up for the Dail by-election next spring to replace Phil Hogan TD, who is off to Brussels as EU Commissioner in a few weeks time.

Former president of the Irish Farmers’ Association (IFA), John Bryan mingled with the crowds in the Fine Gael tent with John Paul Phelan TD while the Fianna Fail marquee at the show entertained around 700 people.

Sen Pat O’Neill of Fine Gael received a great reception from his fellow farmers and he might be the Fine Gael candidate, especially if there is a “give away” budget.

However, former TD, Bobby Aylward of Fianna Fail was pressing the flesh and was certainly the most popular politician on view with fellow FFers, Cllr Peter “Chap” Cleere and Cllr Matt Doran also milling around. They could be seen as potential candidates for the seat vacated by Big Phil and don’t rule out Cllr Pat Fitzpatrick, who was also there, from the north of the county, who would be a good compromise candidate for FF.

And Cllr Malcolm Noonan of the Green Party was also in the showgrounds and if he runs, he will go a long way to being elected. Sinn Fein had a stand and a small marquee at the show, suggesting they will have the very popular Cllr Kathleen Funchion as a candidate.

And there was a lot of wheeling and dealing in All Ireland hurling tickets with Tipp and Kilkenny fans out in force ahead of the big day on September 7.

The big news coming from the show on Saturday was that the Aldi Irish Angus Bull Calf Championships is to remain at Iverk for the next four years. A three year extension to their current commitment which was due to expire next year was announced. Generously sponsored by Aldi in association with ABP Ireland Food Group and the Irish Angus Cattle Society, it boast a prize fund in excess of €20,000 making it the richest cattle class in Europe.

Aldi chose Iverk Show last Saturday to make this fantastic announcement because of the resounding success of the past two years. The huge interest shown in the competition from Angus breeders and the professional organisation of the final at Iverk makes the show an ideal venue for future championships.

The Red Mills sponsored poultry area was a hive of activity and noise all day. Visitors are always amazed to see such a variety of different breed of birds from bantams to water fowl with hard and soft feathered breeds. A favourite amongst the children was the farmyard hen with her brood of chickens.

The new events introduced this year for the first time were a great success and all being well will be extended next year. There were over 100 entries in the photography classes. The flower arranging section was packed with visitors all day and the junior baking classes will insure that home cooking is as popular as ever. They looked gorgeous and one graved for a taste. The magnificent horse drawn carriages were so expertly driven with their brasses gleaming in the sunshine.

The arts and crafts, fruit, vegetables, flowers and baking classes were well up to usual expectation and standard. Well done to all who took part.

The dog classes are always well supported and this year was no exception. Now in its second year the fun agility class with its shinny new jumps and obstacles was very popular and exciting. Exhibitors joined in the ‘fun’ of the event.

Of course there is so much more to the Iverk Show. One is always amazed at the size of the agricultural machines on display. From tractors and trailers to harrows and sprayers they are huge.

The small industry and Centra food marquees were thronged with visitors all day. The tug-of-war between local sports clubs was for many the most exciting competition in the show. The shouts and roars from supporters could be heard all over Kilkenny.

The free children’s play was busy up to 7 pm in the evening. The toy tractors were on the go all day and the goat milking demonstrations were very interesting.

In the vegetable section, Dylan Bergin, Jenkinstown won the class for the two best heads of cabbage and they were fabulous and would go down very well, boiled with a nice bit of bacon.

Clodagh O’Reilly, Freshford Road, Kilkenny was judged to have the best dish of five medium sized onions and she won for having the best dwarf French beans.

Not to be outdone, hardworking PRO of the show, Norman Storey won the prize for the Giant Onion, sponsored by: John Flynn, Piltown Fuels Limited. And the largest Sunflower Head at the show was presented by Becky O’ Reilly, Piltown

Keogh’s Model Bakery - Callan, Kilkenny and Carrick-on-Suir and the competition for the four best Chocolate Muffins, was won by Roisin Duggan, Owning. The primary school class for the best home-made Apple Tart was won by Marlise Flynn, Owning.

The president, chairman and committee thanked exhibitors, sponsors, trade stand and visitors who contributed in any way for making the Iverk show such a success. Many trade stands have already booked their place for next year so we would encourage anyone who wants to be there to book early. The date is Saturday, August 22, 2015.