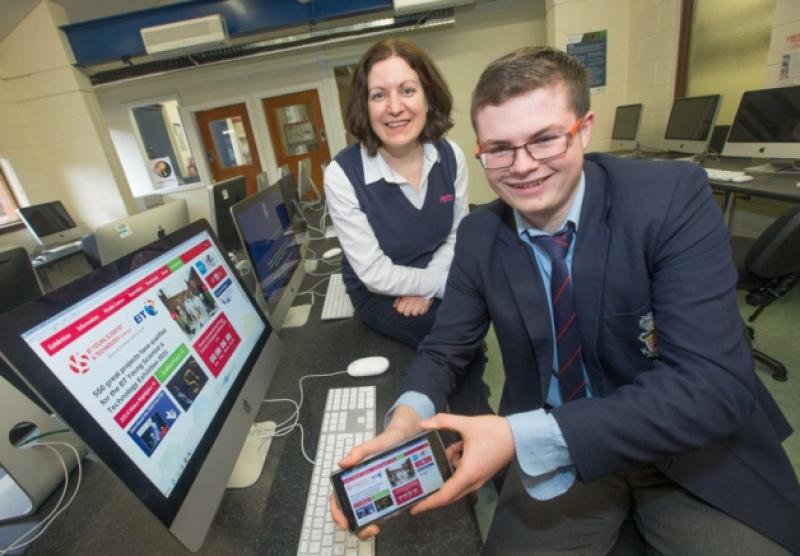 A local student did himself and his school proud last week, winning the runner-up individual prize and a Google prize at the BT Young Scientist Competition in Dublin.

A local student did himself and his school proud last week, winning the runner-up individual prize and a Google prize at the BT Young Scientist Competition in Dublin.

Jack O’ Sullivan, a student at Kilkenny College, was recognised for his project providing his smartphone with the functions and capacities of a desktop computer. The challenge was to find a way to bring the desktop software to the phone, getting the operating system and display right.

His board connects to the phone and to peripheral equipment, establishing a system whereby the board and phone can communicate. With cheaper laptops becoming available, and technology for phones improving, Jack says that the specs between the two are getting much closer. His aim was to further bridge that gap.

“So the idea is that you use the phone and don’t have to buy a separate computer,” he told the Kilkenny People.

He began his work in August, and carried on working right through Christmas to have everything ready.

“It was hard work – especially at the end,” he said.

The result of this saw him winning the ‘Best Individual Male’ category in Google’s Creative Technology Award, as well as the runner-up individual prize. There was also prize money of €1,200, which he is planning to invest wisely. The Google prize wins him a trip to one of Google’s European research centres  for two days.

But perhaps one of the most significant outcomes of the week was not an official prize at all. One of the competition judges was Joe Hogan – founder and CTO of the major software systems company Openet. He offered Jack an internship for the summer, which is an enormous opportunity for the 16-year-old.

“It is clear that the national judges see the practical application and potential of this project,” he said.

“The college is immensely proud of Jack’s success.

“Working with his science teacher Ms Erica McNiece, supported by other members of the science and technology departments, Jack has used the core skills of investigation, testing, analysis, and application to create a high value product with significant development potential.”

Mr Thompson said the importance of science and technology within second-level education is consistently noted by the Government, the DES, and the business  community.

“Kilkenny College is committed to providing a wide range of opportunities for our students to engage in meaningful learning experiences in each of these areas of study,” he said.

“All the laboratory sciences are available to students as are the full range of practical subjects and information technology using by Apple and Microsoft platforms. I look forward to continued participation and, hopefully, future success for other students enthused by what Jack has achieved.”

Jack is now planning on taking a break from this work for a little while, but says there is plenty more room for development of the project. He contends that all these different technologies are ultimately evolving towards one device.