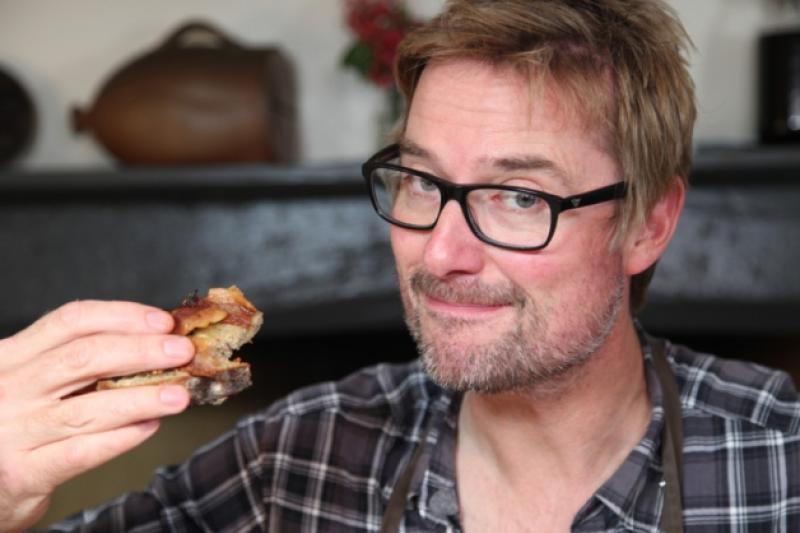 One of the inspirations behind the world famous River Cottage restaurant, cookery school and TV series, Steven Lamb, and Kilkenny native Minister for Rural Development Ann Phelan officially opened the pioneering new School of Food in Thomastown, Kilkenny, this afternoon

One of the inspirations behind the world famous River Cottage restaurant, cookery school and TV series, Steven Lamb, and Kilkenny native Minister for Rural Development Ann Phelan officially opened the pioneering new School of Food in Thomastown, Kilkenny, this afternoon

Lamb is known to millions of TV viewers for his role in promoting the famous River Cottage food ethos in the UK which has helped change the eating habits of a nation and improve the welfare and sustainability of animals and fish.

The inspiring food expert – who recently published the River Cottage Curing & Smoking Handbook - cut the ribbon on the new School of Food which will train the next generation of Ireland’s professional and amateur chefs.

The school, part of the Town of Food project, is a significant and exciting step towards the development of Thomastown as a major food hub in Ireland. The school is based in a new food campus which will also include a community garden and a food business incubation centre.

Town of Food is a community led initiative, supported by LEADER, and aimed at promoting Kilkenny as a food destination. Its mission is to support the production and promotion of local, quality food as well as developing a top class national educational food centre.

The new School of Food will provide a wide variety of evening, half day, full day courses as well as ongoing part time training programmes. Starting from January 19th the courses include:

Some of the public classes on offer for 2015 include sports nutrition, vegetarian cooking, cooking with kids, beer brewing and developing hospitality skills.

Steven Lamb has been involved with River Cottage since it opened and teaches on several courses at the Cookery School. He appears regularly in the River Cottage TV series and travels around the world as their brand leader.

He said: “I am delighted to be in Kilkenny for the opening of the School of Food. This is a really exciting project and I hope that we can develop an ongoing relationship between The School of Food and River Cottage. Personally, I have committed to remain involved and to support in any way that I can.”

He said The School of Food ethos and the structure of the planned Chef Training courses are a perfect match for River Cottage.

“The Chef Training that we offer follows similar ideals to those laid down by the team at the School of Food and we are already investigating the possibilities for student exchange and other collaborations.”

“I love the community base of the project and the fact that the team at the School of Food are not just offering top end professional and amateur courses.” The team at the School of Food have achieved so much in developing a state of the art food training facility and a major food hub in a part of Ireland that already has a strong foodie culture - and all on the back of voluntary effort and the goodwill of sponsors and donors. This is inspiring. “

Francis Nesbitt, Project Co-ordinator of Kilkenny Town of Food said: “After so much planning, so much work, so much fundraising and so much fun we are delighted to be able to announce the first courses in the brand new Kilkenny School of Food. We are very proud at this major milestone in the project, none of which would be possible without the wonderful team working behind the scenes and the support from Kilkenny LEADER Partnership. Town of Food has a truly inclusive, well-thought-out and achievable vision to put Kilkenny at the centre of Ireland’s food culture.”

He added. “We are also very privileged to have Minister Ann Phelan and Steven Lamb open these doors today and look forward to working with our friends at River Cottage HQ. We hope this School of Food will have a bright future and enjoy the taste of success as we train the chefs of tomorrow.”

Bookings for courses for 2015 are open now at www.townoffood.com There will be two free open days on January 17th and 18th in which everyone is invited to attend.