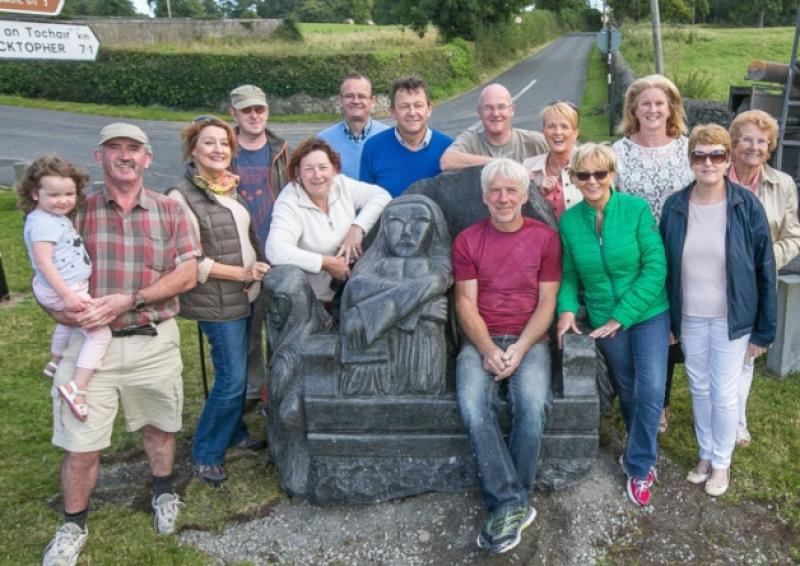 Kevin T Fennelly’s stunning sculpture overlooking Kells village and the Priory has been wowing visitors and locals since it was put in place last week.

Kevin T Fennelly’s stunning sculpture overlooking Kells village and the Priory has been wowing visitors and locals since it was put in place last week.

It doubles up as a rest place for weary travellers where they can sit next to the effigy of Dame Alice Kyteler who is in a crouched position with knees up, waiting to be fed by her maid Petronella who is sculpted to the side, with a fierce face, preparing a piece of fish for her mistress.

Some local people mistook Alice’s knees for her chest but a second look and it becomes obvious that she is waiting to be fed with an air of disdain, even indifference. It is a fantastic pose and shows Kevin’s grasp of the subject.

It was created from a piece of limestone quarried in Kilmacow by Roadstone.

Kevin who is one of the country’s leading sculptors has worked for many years in wood but has been drawn to stone over the last number of years. He prefers it and works out of his studio in the village.

Hillary O’Carroll, Kilree, Kells came to admire the piece on Wednesday morning last and said it was amazing. “It just shows how talented Kevin is. He works really well in wood too but stone is his forte,” she said.

At the back of the sculpture is an image of a window, depicting one of those in the Priory below while the motifs at the bottom, depict the seven castles that make up the priory.

The sculpture started life as a monk but once Kevin heard that Dame Alice was questioned at the Priory over trumped up witchcraft charges he decided to change the piece.

However he has kept a little of the original with a little holy water font to the side.

There is a also great credit due to the hardworking Kells Tidy Towns Committee for commissioning Kevin to enhance the village and to help their efforts to promote Kells and showcase how wonderful it is.

Dame Alice and Petronella weigh 2.8 tonnes and Kevin received help from Richard Kenneally from Kilmoganny to lift into place.

Kevin, modest to a fault, is delighted with the reaction to the piece and says that while he really enjoyed working with wood, he feels he can accomplish more working with stone, and in particular, limestone from Kilkenny.

There are a number of large limestone rocks in the carpark at the Priory and he has been given a “Gothic” looking one by the Tidy Towns committee. He has already decided that it will be sculpture of one of Kilkenny’s best loved villians, The Robber Freney, who was a dashing highway man with an eye for the women who was pardoned and died of natural causes.