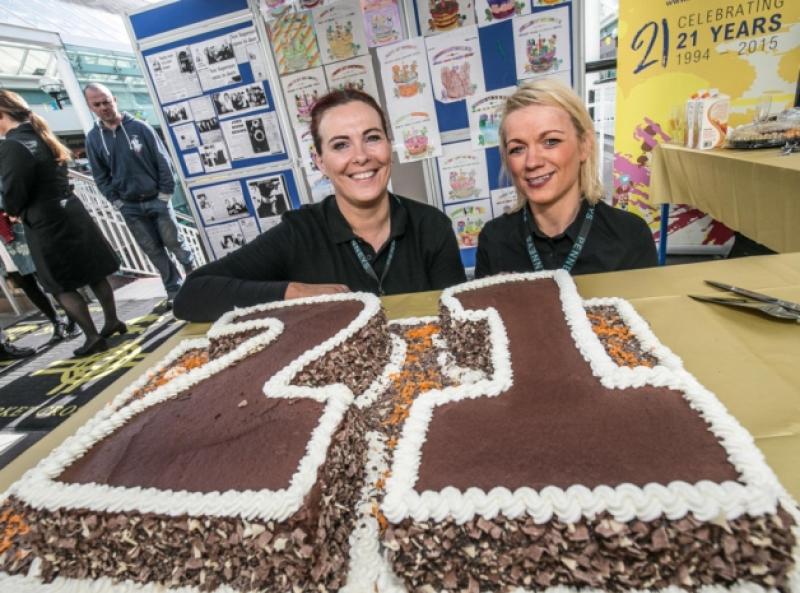 The shopping centre has welcomed millions of customers through its doors and has become a city centre landmark since opening in 1994, ‘so now it’s time to celebrate’ say Assistant Manager Lesley Cleere.

The party kicked off yesterday with a birthday cake baked by Supervalu’s employees including Aisling McCarthy who has worked at Market Cross since it opened in 1994. Special guest Mark Keaveney, Director of Peter Mark, who opened a Peter Mark store in Market Cross 21 years ago was back to cut the birthday cake. The Boys CBS Choir serenade the guests while Mayor Andrew McGuinness gave an inspiring speech about local businesses surviving the heat of the recession.

Centre Manager John Chatten was thrilled with the turn out and would like to extend his appreciation for the continuous support from the public and loyal shoppers over the years.

Chatten added: “Without the centre’s loyal customers it simply couldn’t have stood the test of time. It’s a testament in itself to those stores which opened in 1994 and are still there today: Specsavers, Dubray Books and Penneys.”

Kilkenny’s popular shopping centre will continue the celebrations with lots of family fun this Saturday (March 28) from 11am – 6pm. An open invitation has been issued by Assistant Manager, Lesley Cleere ‘to bring the whole family to the Market Cross on Saturday’.

“They can expect great fun with Conor Lambert’s Puppet Company, the amazing Minions Dance special with hi-5’s, selfies and hugs all round not to mention face painters and walk about costume characters,” she added.