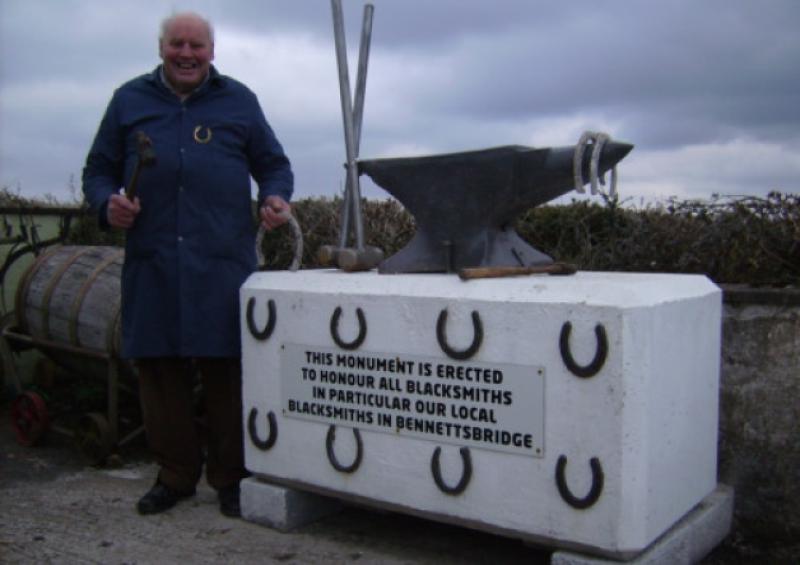 A monument has been created and erected to honour the blacksmiths of a Kilkenny village. Seamus Lawlor, curator of the Nore Folk Museum, unveiled the monument on the grounds of his widely acclaimed heritage centre on Cannon Hill, Bennettsbridge.

A monument has been created and erected to honour the blacksmiths of a Kilkenny village. Seamus Lawlor, curator of the Nore Folk Museum, unveiled the monument on the grounds of his widely acclaimed heritage centre on Cannon Hill, Bennettsbridge.

The monument pays tribute to all blacksmiths in Ireland, with special emphasis on the local ones.

In Bennettsbridge, Reddy’s Forge was located on the site where a restored pump now stands, near a butcher’s shop and pub just below the bridge.

In its hay-day back in the early twentieth century, it supplied the needs of work horses used by Mosses Flour Mills, as well as catering for farmers and others requiring tools vital to their businesses.

A second forge was situated half a mile outside the village, on the Thomastown road. Hackett’s Forge also kept horses and donkeys shoed and was never idle. Sparks could be seen flying there day and night as the smithy plied his trade.

Speaking at the unveiling, Seamus said he was delighted to be according recognition to the blacksmith, whose trade no longer occupies the place it once did in our society, though he added he was happy you see a revival of the skills associated with it by artists who now applied these to creative works as distinct from the molding of utilitarian appliances.

Seamus remembers meeting Bill Hackett in his youth, when the blacksmith shoed a donkey for a member of the Lawlor family. “He was a man of great wisdom and insights” he recalls, “and he’d do the job with his eyes shut, so proficient was he at his profession.”

Hackett’s Forge has been restored in recent years and can be seen by visitors.

Seamus wistfully recalls how Bill Hackett held callers to his forge entranced when he fashioned objects from metal, by heating and then battering them into shape on the anvil.

“When you approached the forge, you felt a blast of intense heat and you heard the hammering. It was as busy as any corner shop.”

The two forges also provided a service to the local creamery, forever in need of equipment, repairs, or shoes for horses in those pre-mechanical times.

The monument itself has an inscription and apt horseshoe motifs relevant to the theme.

Print and design was by Derek Maher of the Dublin Road, Kilkenny, and the plinth was constructed by Precast Concrete.

Seamus also thanked local man Stephen Fitzpatrick who assisted in the positioning of the monument with his forklift.

Following a visit by members of a continental tour group to Bennettsbridge, the Chancellor’s secretary wrote to Seamus, “The Chancellor applauds your joyous and wonderful work in promoting Ireland’s culture and heritage through your vast collection of artefacts.”

The museum, that nestles on the top of historic Cannon Hill in the shadow of the Blackstairs Mountains and Mount Leinster, underwent renovation in 2011, including the addition of further exhibiting space necessitated by the need to accommodate the more than 12,000 artefacts on display.

The exhibits range from ancient farm tools pre-dating the Stone Age, complete threshing sets, relics of the Land War and famine era, and replicas of old pubs and blacksmith’s forges, to everyday household contrivances representing all the decades of the last three centuries.

The Museum houses a history of the Penal Times, the Great Famine, 1916 Rising and the War of Independence. It also houses an old time kitchen, old fashioned pub, old carpenters workshop, old forge and much more.