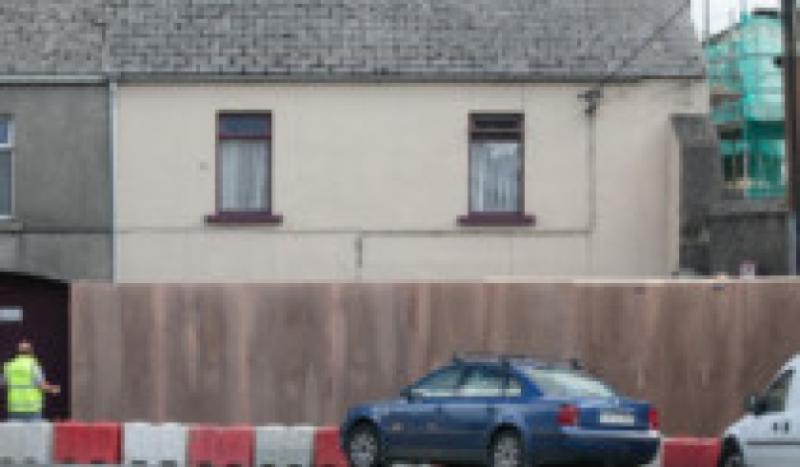 Preliminary findings from the archaeological survey of numbers 21 and 22 Vicar Street appear to reject the assertion that historic remains from an ancient manse house are present.

Preliminary findings from the archaeological survey of numbers 21 and 22 Vicar Street appear to reject the assertion that historic remains from an ancient manse house are present.

A new report was handed to councillors at a joint meeting this afternoon.

The houses, which are to be demolished to make way for the Central Access Scheme, have been the subject of intense scrutiny and debate in recent weeks. These new preliminary findings, made public here for the first time, appear to reject the assertion that the remains of the manse house of the Prebendary of Tascoffin are intact at the site.

“The manse house of the prebendary of Tascoffin had gone before 1679 and hence none of the present buildings incorporate its remains,” finds the report.

“As the prebendary of Tascoffin’s land did not include the Diageo car park this earlier building cannot be a remnant of the manse house.”

The survey also says that the removal of plaster from the houses has confirmed that the front, rear and internal walls of numbers 21 and 22 Vicar Street were rebuilt. Some earlier portions of wall remain, but these are of 18th or 19th Century date.

It says that the gable end of 22 Vicar Street, facing the Diageo car park, is part of an earlier building, or buildings, that stood on the car park site. The report suggests that the gable does not coincide with the building shown on the 1758 map, suggesting that either the map was wrong, or the gable is from a different building.

It finds there is a small opening in the gable wall and this is lined with cut stone. Which building this belonged to is ‘uncertain at present’.

The process of investigation of the Vicar Street building’s archaeological and architectural heritage is ongoing.

Below is a section of the new report entitled ‘Research carried out for this project’:

Bishop Otway’s survey, on which all of the authors base their findings, was checked for this project. This showed that Ledwich made a number of significant errors in his short quotation, the first being the date, which was actually 1679. Secondly, the survey does not mention a street called King Street, but “the king’s street”, which is an urban equivalent of “the king’s highway” – a description and not a name. It is notable that no other source has suggested that there was a street in that location called King Street.

Hogan drew conclusions from the map of 1758 that sounded authoritative, but which were only his conclusions and the map does not show this at all.

None of these authors cites the extensive works by the most prolific writers on the history and antiquities of Kilkenny, Rev James Graves and John G Augustus Prim, who appear to have left no record of this building in Vicar Street or the manse house of the prebendary of Tascoffin. In their book on the history, architecture and antiquities of St Canice’s there is no mention of such a manse house. Graves made no reference to it in his paper on the ancient street architecture of Kilkenny, which discussed a number of older buildings that survived in Kilkenny at time he was writing, in 1857.

The prebendary of Tascoffin did have land in the area, but research has found the following.

The survey of 1679 refers to “a piece of waste ground in Irishtown where formerly the manse house stood ... on which there is now a thatched house built.”

A deed of 1732 describes the land as the prebendary of Tascoffin’s glebe land “with the cabins houses and tenements built thereon”.

In 1824 the prebendary of Tascoffin granted a lease of three cabins in Vicar Street and these were on the site now occupied by 20, 21 and 22 Vicar Street.