Minister reviews the troops as they prepare for Syria 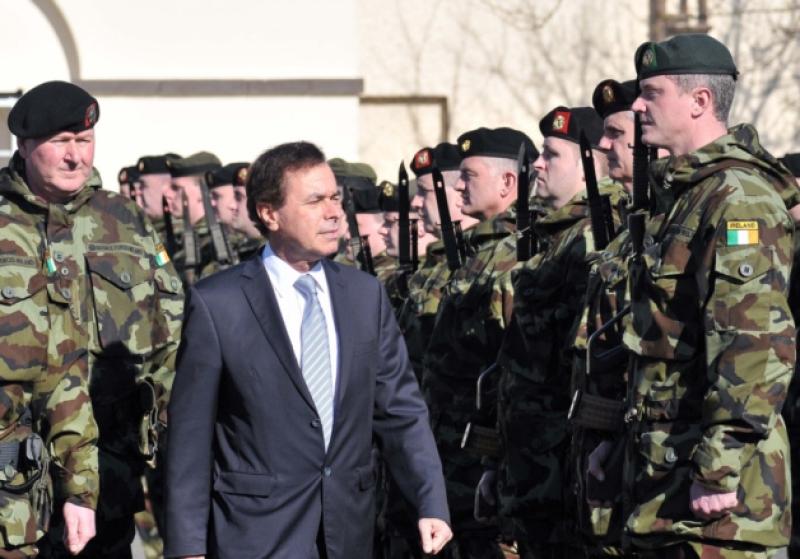 Minister for Justice Alan Shatter was in Kilkenny’s James Stephens Barracks on Monday to inspect the troops of the 44th Infantry Group as they prepare to leave for Syria.

Minister for Justice Alan Shatter was in Kilkenny’s James Stephens Barracks on Monday to inspect the troops of the 44th Infantry Group as they prepare to leave for Syria.

The group comprises 130 Irish personnel – 15 officers and 115 enlisted personnel. They will deploy to the Golan Heights at the end of the month for peacekeeping duties.

On Monday, the group displayed in front of hundreds of locals – friends and family members of those departing. The unit flag was blessed by the barracks chaplain, Fr Dan McCarthy, and was brought on parade also.

“This is a proud day for you and for your families,” he said.

“You will be serving your country and the wider international community. I know you will work hard to maintain Ireland’s proud international reputation.”

The Syrian Golan has been illegally occupied by Israel since the June 1967 war, but a fragile truce has existed in recent years maintained by the UN. The United Nations Disengagement Force (UNDOF) was established to supevise an ‘area of sepatation’ between Syria and Israel.

The 44th Infantry Group will provide armoured protection for UNDOF personnel, patrol the area of separation, and provide support to UNDOF staff. While the Defence Forces have a record of peacekeeping with UNIFIL in Lebanon, this tour marks a new departure.