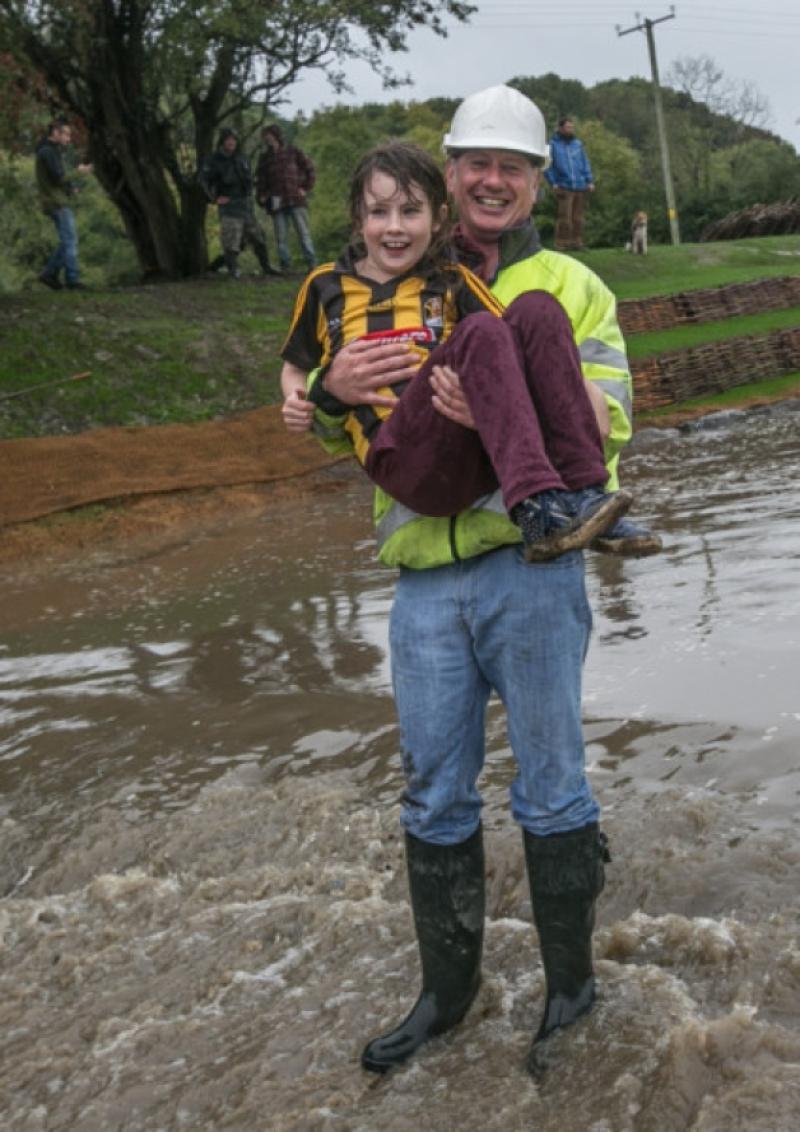 The power of community and the importance of organisations like the Kilkenny Leader Project and Kilkenny County Council was brought home on Friday afternoon when a new Olympic size open swimming pool was flooded for the first time after years of hard work.

The power of community and the importance of organisations like the Kilkenny Leader Project and Kilkenny County Council was brought home on Friday afternoon when a new Olympic size open swimming pool was flooded for the first time after years of hard work.

A huge cheer went up when the bucket of a mechanical digger broke the dam to form Thomastown’s new outdoor swimming pool on the River Nore in the shadow of Grennan Mill.

It marked the culmination of a six year journey for the Thomastown Community River Trust (TCRT). However this voluntary body isn’t finished - It has plans to significantly improve the immediate area having purchased an acre of land by the pool area for this purpose.

And no concrete was used in the reconstruction of this site. The materials used were all natural and ecologically engineered by the contractors ESK and Rivus.

“We are supported by Irish Water Safety, Thomastown Community Council, Thomastown Soccer club, Thomastown primary school (with whom we have had active engagement with both teachers and pupils) and Thomastown GAA Club, one of the founders of the initiative,” Shem Caulfield said.

He acknowledged the work of the team at TCRT and all the wet and miserable Thursday nights they came for meetings.

In particularly, he acknowledged the role of Leader in supporting and guiding the trust through a complex process from inception through to the work we have completed on .

He also acknowledged the support of the Heritage Council for the Industrial Heritage of Thomastown project and for its support for the conservation of the built industrial Heritage Architecture at the weir. Kilkenny County Council facilitated cross party discussions with all of the state agencies, which helped bring the proposal to fruition.

The site boasts an Olympic size swimming pool an intermediate area for those learning to swim and a paddling area for younger children. It has sluice gates (rebuilt to heritage standard) for water management purposes.

TCRT have along with Thomastown Paddlers purchased a one acre site adjacent to the swimming site and it is hoped to support the biodiversity in this area of special conservation by engaging with the local primary school and scout and guide groups in planting large areas of the site with indigenous plants and trees.

The Thomastown weir swimming pool is a co operative community venture that has seen the involvement of the Kilkenny Leader Project, the primary funding and support agency, Kilkenny County Council, National Parks and wildlife, Inland Fisheries Ireland, Irish Water Safety and The Office of Public Works. “We are deeply indebted to the support of local landowners adjacent to the site and the community of Thomastown who supported us throughout the past six years,” Shem Caulfield of the TCRT said.

The swimming area will be officially opened next April /May and by then it is hoped to have a filtration system installed by Vieolia Ireland to create the best possible non-invasive ecological friendly system for water clarity.

Access to the site should be by foot from Mill Street and that this is a an area of special conservation. Cognisance should also be taken that the mill building hosts Grennan Mill Craft school, The Ceramic Design Course run by the Crafts Council of Ireland and the area adjacent to the site is a working farm and has family homes.

“We are in the process of forming a management committee and would welcome active participation from as many locals as possible. Fundraising is a perennial and any ideas or support in this regard would be most welcome. Now is the time to jump in metaphorically,” Shem Caulfield said.

The heritage refit of the sluice gate and wheel breast gate made by Roland Henderson; the stone work completed by Brennan Brothers; the blacksmith was Paul Devlin, Castlecomer; archaeologist was Rex Bangerter and heritage consultant Ivor McElveen.