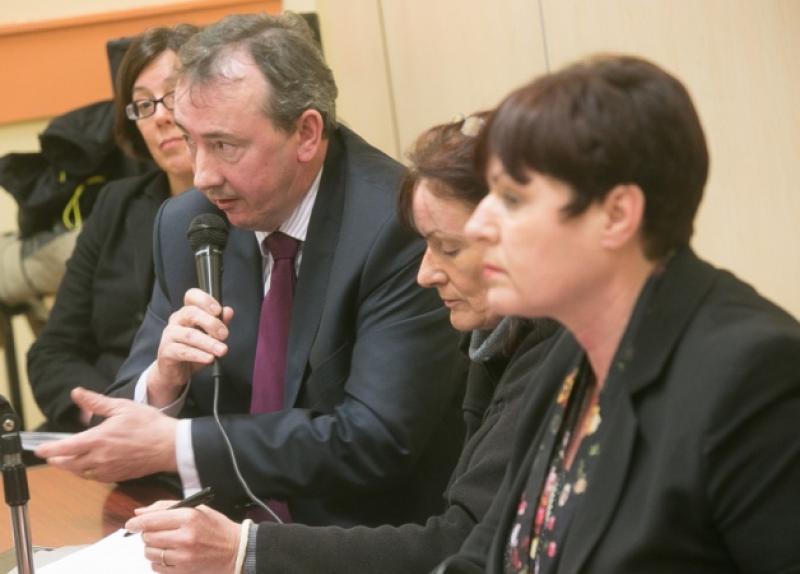 Bus services in north Kilkenny are to have a stay of execution until the end of June, while a working group explores alternative solutions for when Bus Eireann removes a number of rural towns from its Route 7.

Bus services in north Kilkenny are to have a stay of execution until the end of June, while a working group explores alternative solutions for when Bus Eireann removes a number of rural towns from its Route 7.

Around 200 people turned out in Castlecomer Community Hall on Monday evening for the latest public meeting over pending cuts. Locals asked some tough questions of the top table panel, which comprised Bus Eireann CEO Martin Nolan, Minister of State for Rural Affairs Ann Phelan, and Anne Graham, CEO of the National Transport Authority.

Minister of State Phelan acknowledged people’s frustrations. She proposed to get a working group together to work with the NTA and her office to explore alternatives.

“I want to find a solution that will make things workable again,” she said.

The working group is expected to be established in the coming days. It is not yet known who will be part of its formation, but it is likely that local TDs and councillors will be involved.

Bus Eireann CEO Martin Nolan said he would keep the buses going while the matter was being discussed.

Cllr Maurice Shortall, who moderated the meeting, said he had spoken recently to service provider JJ Kavanagh. He said that Mr Kavanagh had said that the company had not yet made any firm decision on its route, and may be open to the idea of a reduced service.

“We don’t mind giving it a few weeks and months, but the passenger numbers just aren’t there,” he said.

Cllr Pat Fitzpatrick afterwards said that the meeting had yielded some progress.

“It’s a small step in the right direction, but it’s very early road yet,” he said.

“We have to see now what the working group can achieve. The people here deserve a long-term solution.”