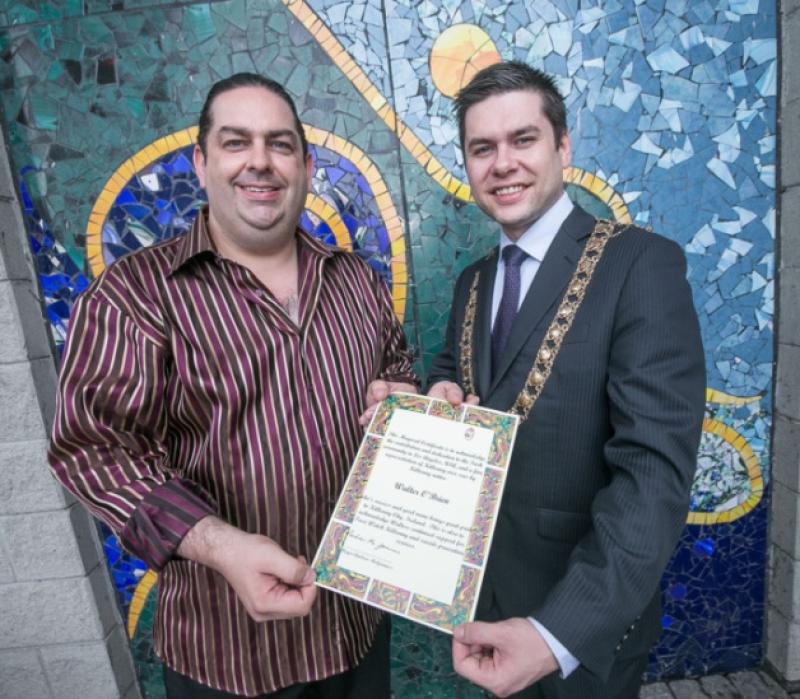 He has briefed some of the top military figures in the US army in recent weeks.

Mr O’Brien made international headlines when he reportedly hacked into NASA’s computer systems at the tender age of 13.

“I did hack into them but I am not allowed to talk about it. They subsequently employed me to show the vulnerabilites in their systems,” he said.

He is also the inspiration for and executive producer of the 2014 CBS television series Scorpion. The first episode of the series attracted 27 million viewers and the second series is due to air this month.

Even as a teenager O’Brien was a youngster that was noticed in his local community as someone who possessed extraordinary talent.

“I remember him coming in to help me out when I was starting up Paris Texas. Even then he knew things people did not have a clue about and was very smart when it came to doing things with computers.

“It was clear that it was moving too fast for the rest of us and he left a short time later. I remember even as a 16-year-old he stood out and used to wear a suit,” remarked High Street vintner, Pat Crotty and early customer of Scorpion Computer Services.

He went on to study artificial intelligence and computer science in university before been given a visa by the US government for his ‘extraordinary ability’ and has worked with a number of US state agencies over the past three decades.

The Chairman of Aerospace Defense Systems at US Army Base Fort Stewart Georgia confirmed in a written reference that they carried out exceptional due diligence on Scorpion and Walter O’Brien and that Scorpion has been engaged in a number of highly confidential cyber security threats with the DOD (US Department of Defense).

Another written reference from an RAF Architect confirms that the Artificial Intelligence system ScenGen is deployed at both Lockheed Martin and Northrop Grumman (the US’s two largest military contract firms) on the $10 billion Aegis Ballistic Missile Defense System, and the Navy’s Command and control system and further mentions that Walter personally coded the installation. It goes on to say that the War Game planning for Afghanistan was executed hands on by Walter over classified SIPR government networks. The lauded genius recently met with the United States Special Operations Command which is charged with overseeing the various Special Operations Component Commands of the army, air force, navy and marine corps of the United States Armed Forces. The command is part of the Department of Defence and is the only Unified Combatant Command legislated into being by the U.S. Congress.

Walter O’Brien is the innovative founder of Scorpion Computer Services and ConciergeUp.com, a global think tank-for-hire that provides on-demand intelligence as a concierge service for any funded need.

For over two decades, Scorpion Computer Services has contributed to the greater good by managing geniuses as they transform Scorpion client ideas into reality.

The INS now the U.S. Department of Homeland Security has certified O’Brien as being a person of national interest to the United States and granted him an Extraordinary Ability EB 1-1 Visa. He has worked with the US Department of Homeland Security as well as the Navy and Air Force systems to employ his artificial intelligence systems to protect American military personnel.

Mr O’Brien regularly donates his time and talent to helping and educating smart charities and the community in general to encourage new generations to celebrate intelligence. He also remains close to his Kilkenny roots and was instrumental in helping fund the initial start up cost of Kilkenny Taxi Watch which has prevented 45 suicides to date.

The service was set up by local taxi driver Derek Devoy and is a network of taxi drivers who are trained to assist people in distress and also carry life saving materials in their vehicles.

The 40-year-old recently travelled back to Kilkenny recently to accept a Mayoral certificate from the then Mayor Andrew McGuinness to acknowledge the contribution and dedication to the Irish community in LA. Cllr Mc Guinness also commended him on ‘the great pride’ that Mr O’Brien brings to the city and thanked him for his continued support for TaxiWatch Kilkenny and suicide prevention services. Walter was nominated Irishman of the Year by the Mayor’s office of Los Angeles too for his representation there.