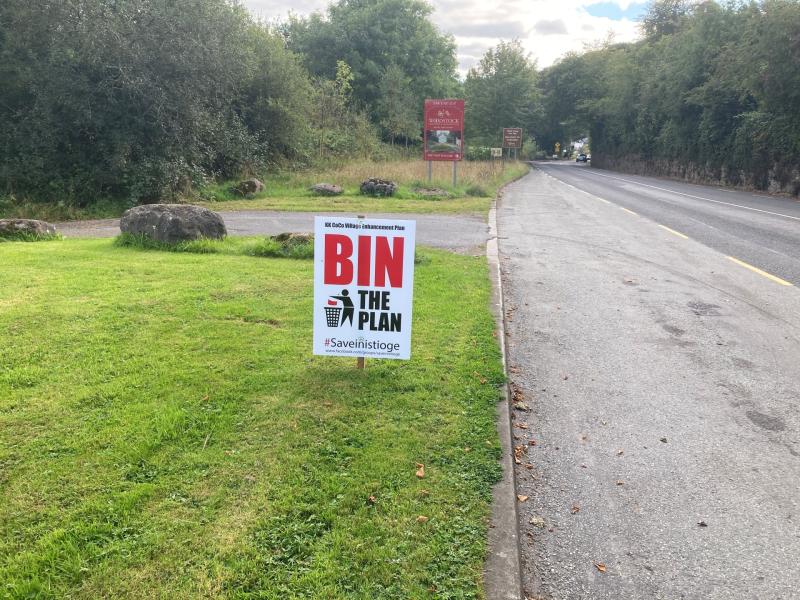 A #SaveInistioge protest sign on the road into the village

Many Inistioge residents are worried about the possible impact that a new traffic management and village enhancement scheme will have — fearing it could detract from the historic village’s potential as a movie film location.

A protest group under the banner of ‘#SaveInistioge’ has recently been set up in the picturesque Kilkenny village to oppose the scheme.

The group is now preparing a signed petition to be delivered to an upcoming meeting with Kilkenny County Council officials.

The petition has attracted hundreds of signatures from both local residents as well as from people from outside the area.

Spokesperson for the group, John Gilsenan, says that many locals were not familiar with the finer details of the plan until very recently.

The new paving proposed for the village has drawn particular attention.

“People have seen the extent of the paving in Thomastown and elsewhere and they’re dreading this happening in our nationally-recognised heritage village,” Mr Gilsenan said.

Many in the group worry that the modernisation of the village streetscape will make it impossible for the village to be used as a film location in the future.

“While we accept there is a need for some traffic management measures, what is proposed is excessive, unnecessary and inappropriate,” he added.

The 2004 plan noted that the full potential of the area around The Square in the village centre was not realised due to a lack of directional stability caused by the expanse of tarmacadam and existing road pattern.