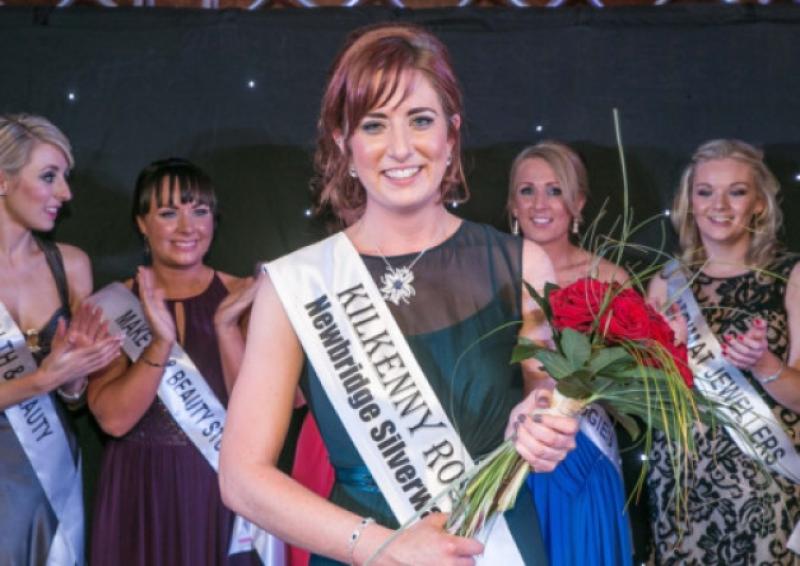 Surprised, delighted, shocked and thrilled – that’s how Kilkenny’s new Rose summed up her emotions yesterday on how she felt upon hearing her name called out as the winner at Monday night’s county festival.

Surprised, delighted, shocked and thrilled – that’s how Kilkenny’s new Rose summed up her emotions yesterday on how she felt upon hearing her name called out as the winner at Monday night’s county festival.

Lorna Fennelly from Ballyhale emerged triumphant ahead of nine other contestants, and she will now go on to represent Kilkenny at the regional festival in Portlaoise at the end of the month. Her proud parents Michael and Margaret, as well as siblings Grace, Mags, Ciara, Michael and Colin were all delighted for her as well.

“I was surprised and delighted – you can’t really tell how you have done from the interview,” said Lorna.

“But all the girls were fantastic. I was nervous, but Brendan Hennessy was great and made us feel at ease.”

All the prospective Kilkenny Roses and their supporters gathered at the Ormonde Hotel on Monday evening for a night full of entertainment, glamour and great fun. The contestants spoke onstage with MC Brendan Hennessy and had an opportunity to do a party piece. All were interviewed by a judging panel prior to the selection night.

Last year’s Rose Aoibhín Murphy handed over the crown to her successor around midnight. She also gave some advice from her own experiences, as last year she made it all the way to Tralee.

“I was talking to Aobhin as well and she was very helpful,” said Lorna.

“I have to give huge thanks to the Rose Committee; they didn’t miss one detail and made me feel so at ease.”

The 25-year-old is the branch manager for Oasis in Goods in Kilkenny City. She plays camogie with the ‘Shamrocks, where she is also a selector for underage teams.

It capped off a perfect weekend for her and her family, as brothers Colin and Michael were still celebrating their victory over Tipperary in the national hurling league final on Sunday. Colin captained the side, while Michael gave a Man of the Match display.

Lorna is already inundated with messages of support and congratulations from relatives, friends and well-wishers.

“We didn’t finish until around 1.30am and then I went and saw the girls in Matt the Millers,” she said.

“So it was late before I got home. And now my phone here has been hopping all morning!”

There were prizes on the night for ‘Best dressed Lady’ and ‘Best Banner’, as well as a raffle, with all money raised going to Cois Nore Cancer centre. The Roses were also paired with a ‘Rose Bud’ on the night – young local girls aged between 6-10.

Lorna now has to catch up with the Rose Committee to plan the next step. It will include further preparation, and the recording of a 20-second video for the event in Portlaoise.

“I’d love to get through Portlaoise and then on to Tralee,” she said.

“You watch it on tv every year and you don’t really think you’ll enter. I read an advertisment for it last year and just thought, ‘I can do it’ – I felt the time was right.

“It was just a great experience, and I’m going to embrace the opportunity.”

The regional festival, hosted by Daithi O’ Shea, will take place in Portlaoise at the Heritage Hotel from Thursday, May 30 through to Monday, June 3. The celebration, to be held over four days in Portlaoise, will offer the 62 Roses a wonderful experience together with a festival of fun for their families and friends.

The winning Rose will have the opportunity to represent their county at numerous local and national events throughout the year, with their first appearance at the ‘Proud to be me’ fashion show in Langtons on May 15, where they will be joined by past Kilkenny Roses and other local celebrities.