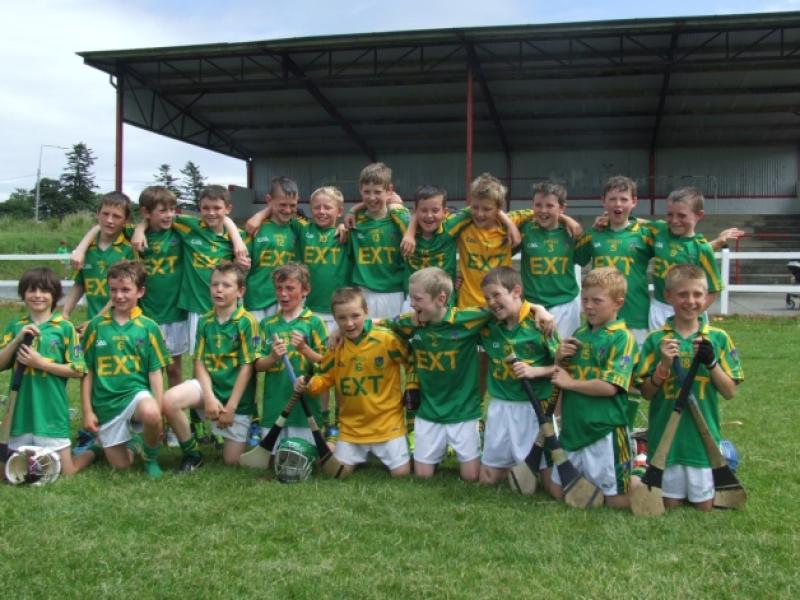 The Aghaviler Community Games U11 hurling team won the Leinster Final on Saturday in Longford. Having had to travel to Craanford in Wexford on June 22 where they won their quarter final, 5 -5 to 2 points, they had the luck of the draw for the provincial finals, going straight into the final.

The Aghaviler Community Games U11 hurling team won the Leinster Final on Saturday in Longford. Having had to travel to Craanford in Wexford on June 22 where they won their quarter final, 5 -5 to 2 points, they had the luck of the draw for the provincial finals, going straight into the final.

On the other side of the draw were Shinrone/Coolderry of Offlay and Knocklyon of Dublin. The Offaly team, (who were the reigning All Ireland champions) won this first game easily and claimed their place in the final against Aghaviller.

Aghaviller got off to a good start with an early goal from Dylan Carroll and added a couple of points in the first quarter. Even though we were creating many chances, not all were being converted into scores and after Shinrone/Coolderry scored a goal ten minutes before half time, there was nothing between the sides. Aghaviller continued to press however and when Denis Walsh goaled around the 15 minute mark, followed by an Aidan O’ Neill goal after a classy ground stroke, Aghaviller had some much needed breathing space at half time when they lead on a score of 3 – 4 to 1 – 2.

Aghaviller started the second half as they had played the first, applying lots of pressure and the fight seemed to drain out of the opposition. The Aghaviller inside back line of Jimmy O’ Neill, Dara Mason and Tomas Barron stood tall with great support play from our excellent half back line of Jack McGuirk, Padraig Lennon and Mason Byrnes. Aghaviller pressed home their advantage and some strong hurling by Daragh Walsh and Conor Denny was followed up with some great scores from Denis Walsh, Eoin Crowley and Shaun O’ Keeffe. With the excellent Killian Corcoran controlling matters at midfield, Oisin Doyle, Colin Fitzpatrick, Adam Long and Shane Fennelly all joined the fray and hurled very well to ensure a strong finish by Aghaviller. Joe Fitzpatrick, who had an excellent game in goal, was replaced by Ryan Grace who made one brilliant save as the game neared the end and Aghaviller eventually ran out easy winners in the end on a scoreline of 6 – 8 to 1 – 4.