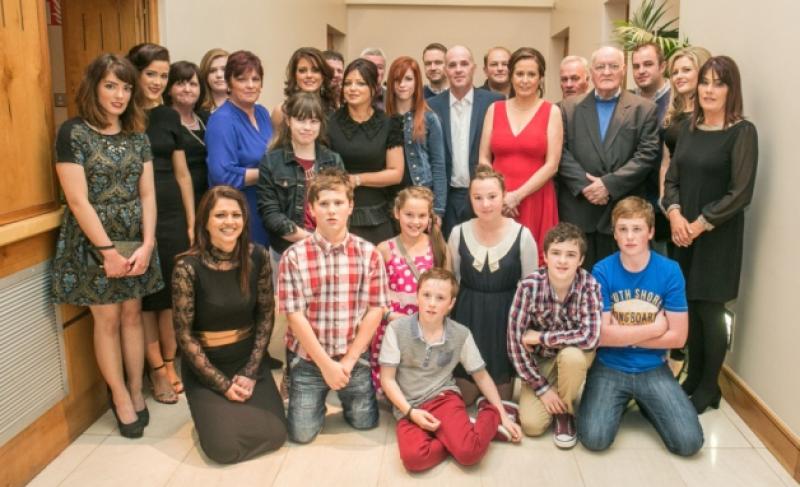 Family and friends of Joe Brennan showed a mamooth hand of support when they attended a fundraiser in the Newpark Hotel last Friday.

Family and friends of Joe Brennan showed a mamooth hand of support when they attended a fundraiser in the Newpark Hotel last Friday.

Approximately 800 people turned out to raise funds for former hurler and publican Joe Brennan who is recovering after been violently attacked in his home in Kilmanagh earlier this year.

Joe who was surrounded by his loved ones, including his sons was overwhelmed by the generosity and support that he has received since the horrific incident last July.

It was uplifting for all to see that Joe is well on the way to recovery. “Everyone has been amazing. If I started to thank people I would not know where to stop,” he said.

It was a night of joy and celebration with neighbours and friends turning out in huge numbers. Organiser Dave O’Neill said that it was ‘turning a positive out of a negative’.

Former Hurler Of The Year Henry Shefflin was there along with his wife Deirdre and former hurling star Adrian Ronan.

Event organiser Dave O’Neill said the genorosity had been incredible since a committee was formed to organise the once off event.

“This event is not for Joe it is because of Joe. It is a turning of the negative into a positive. He would be the first man to help out so tonight is about doing our best to do good in imitation of Joe.

“Joe is a great man, you couldn’t meet nicer. He always has a smile and the turnout this evening is testament to his popularity and is all about people trying to reach out.

“We would like to thank everyone but we have to give a special mention to the Newpark Hotel, Marble City Sounds and Eamon Maher Coach Hire who all donated their services free of charge along with the huge number of people who donated items for the charity auction. Auction items couldn’t to flood it right until the last minute and of course all the people who came along on the night,” said Dave.

A 2001 signed jersey from the Graig Ballycallan teams of 1998 and 2000 was the top item to raise funds in the auction followed closely by a Munster jersey signed by rugby legend Paul O’Connell.

Coaching sessions with ace hurlers Henry Shefflin, Tommy Walsh and Eddie Brennan were also hot items under the hammer. In total over 50 prizes or items were donated.

The revelry continued into the wee hours of the morning with the young and the old taking to the dance floor to the music of Marble City Sound.

There was a strong Fianna Fail presence in the room which was hardly surprising considering that Joe Brennan was a hotly-tipped candidate for the party in the last local elections.

Deputy John McGuinness was present to wish him well along with Deputy Pat Millea. Cllrs Joe Malone and John Coonan were also in attendance along with Pat Fitzpatrick.

Cllr Matt Doran said it was fantastic to see such a massive turnout. “He is getting better all the time. It will be a long road and willl take a while but he will get there,” he said.