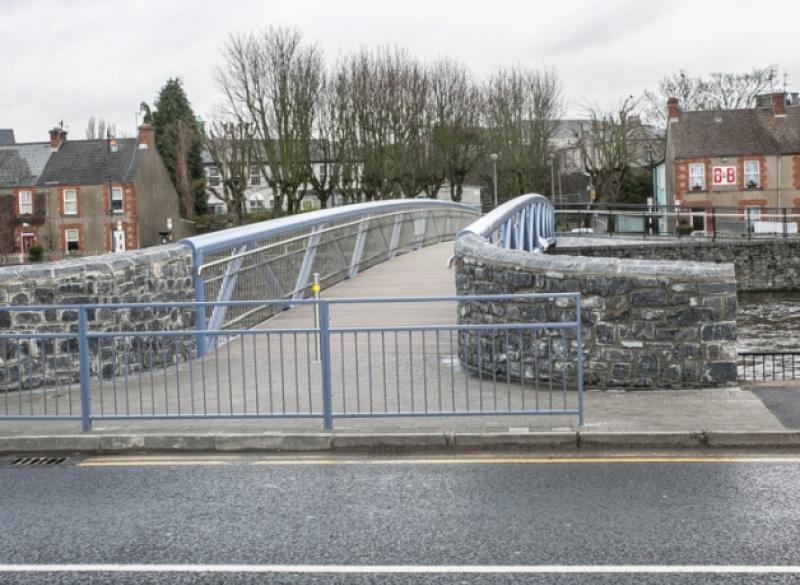 A row is brewing within Kilkenny Borough Council following the revelation that at least one elected member is deeply unhappy with the new pedestrian bridge.

A row is brewing within Kilkenny Borough Council following the revelation that at least one elected member is deeply unhappy with the new pedestrian bridge.

The €600,000 Lady Desart Bridge was swung into place last November and was officially opened to the public at the end of January. The bridge was designed by URS, the company which also delivered the preliminary and detailed designs for the Central Access Scheme.

Speaking to the Kilkenny People yesterday, councillor Andrew McGuinness launched a stinging attack on the new footbridge, claiming that the design, which was unanimously approved by Kilkenny Borough Council, is not what has ultimately been delivered.

“We did not vote for a blue lump of metal that looks totally out of character with Kilkenny, and if you compare the original drawings to the finished product, it looks like two different bridges,” said Cllr McGuinness.

“People are angry and rightly so.”

The Fianna Fail councillor described the blue colour of the bridge as ‘gaudy’, and also said he was disappointed not to see a timber finish, as in the original drawing. He feels such a finish would improve the overall look of the bridge and soften the impact of the tubular steel.

The drawing entitled ‘Colour Option Details’ currently on the council’s website does not include a blue option, while the steel in the CGI sketch appears more cuboid than the cylindrical final incarnation.

“I have waited patiently since the bridge was installed in hope that it would be finished to the same standard that we saw in the original plans,” said Cllr McGuinness.

“It has not even been painted the proper colour and simply looks like a different bridge. It’s not good enough.”

The 33-year-old county and borough councillor also questioned the overall cost of the project. The total ran to €600,000, with the majority of that funding coming from Minster Alan Kelly under the Smarter Travel Scheme.

“As it stands I simply cannot see where such a large amount of money was spent,” said Cllr McGuinness.

Local people have been making representations to their elected councillors, as well as voicing their disapproval on social media sites in recent weeks. Cllr McGuinness said it wasn’t satisfactory to be told there are further plans to improve the bridge.

“The fact is that we agreed on a proposal and we got something different,” he said.

“The public representatives are the ones who take credit or blame for these projects so I believe it is important that people know exactly what their elected representatives voted for and this bridge is not what we voted for.”